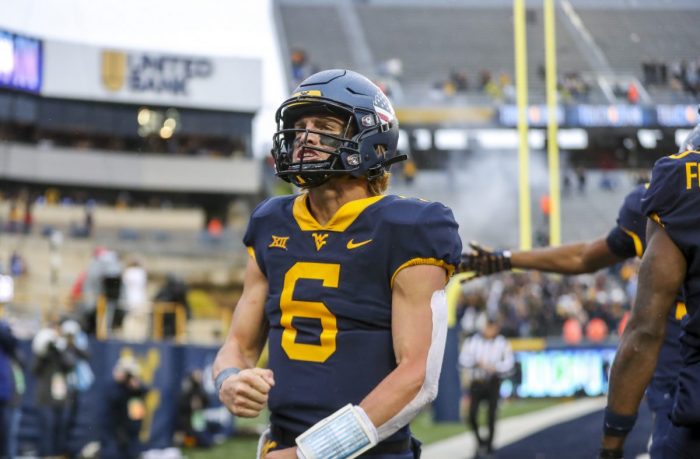 On an ugly, rainy day in Morgantown, it was the West Virginia Mountaineers who came out on top after a walk-off field goal from Casey Legg to make it a 23-20 final.

Despite a carer day from Oklahoma running back Eric Gray, the Sooners’ defense proved inept yet again down the stretch and couldn’t get off the field during a six-minute and 24-second drive to end the game.

The win moves West Virginia to 4-6 on the year and 2-5 in conference play, while Oklahoma drops to 5-5 and 2-5 in Big 12 play. Here are three thoughts on the game and what it means for both teams going forward.

Garrett Greene Makes All the Difference

J.T. Daniels may’ve started the game for West Virginia, but it was Garrett Greene that won the game for the Mountaineers, and he was impressive in doing so. It was clear that Oklahoma’s defensive gameplan didn’t account much for Greene, as he was incredibly effective against the Sooners. At the end of the day, Greene went 12-22 for 138 yards and one touchdown through the air, but the difference really came with what he did on the ground. Greene took 14 carries and turned them into 119 yards and two touchdowns. All in all, Garrett Greene provided a spark that West Virginia needed to get a huge win and they were able to capitilize on that.

Oklahoma running back Eric Gray turned in a career day on Saturday in Morgantown, taking 25 carries for 211 yards and two touchdowns. However, Oklahoma couldn’t take advantage of the performance and squandered away a must-win game on the road. The Sooners continue to find a way to lose games, and not playing complementary football is the main culprit. Oklahoma held West Virginia to six first half points, but couldn’t contain Garrett Greene and the West Virginia offense late. Now, at 5-5, Oklahoma is in a tough spot and is in serious trouble of missing a bowl for the first time since 1998.

With six mintues and 24 seconds left in the game, on a 4th-and-2 at the West Virginia 29-yard-line, Brent Venables elected to attempt a field goal in the wind and driving rain. Sooner kicker Zach Schmit’s career-long was 44 yards, but this was a 46-yard attempt would’ve been his career long and in less-than-ideal conditions. Schmit missed, and West Virginia got the ball and neve gave it back. As soon as the kicking unit trotted out on the field, I knew this game was over. The conservative call, coupled with a Sooner defense that proved inept again, cost Oklahoma the game. Every week, OU finds a new way to lose games, and this week it was the lack of a passing game, shoddy defense, and a bad call in the end.