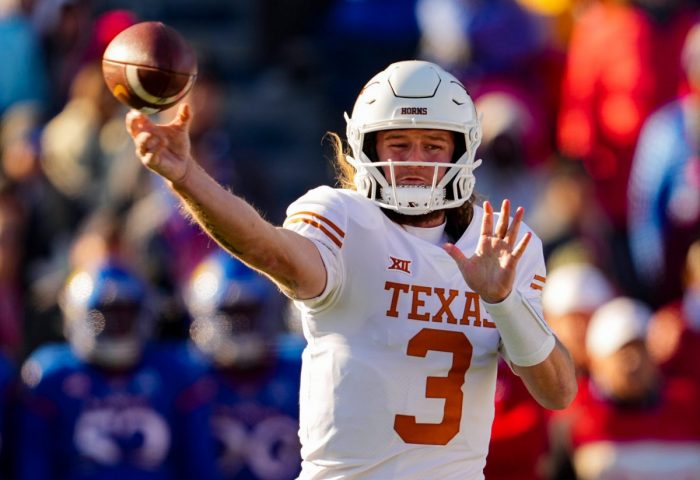 The Texas Longhorns came to play on a cold and windy November Saturday afternoon in Lawrence, Kansas and left town with an impressive 55-14 victory to their resume. The Longhorns ran the ball effectively from the start and stayed with that game plan (427 yards on 55 attempts) until the clock wound down to zero. It was the second time in Texas Longhorn football history where they had a 200 yard rusher and 100 yard rusher in the same game.

The Kansas Jayhawks showed up, but looked like a shell of the team that started the season 5-0. The lack of productivity in all aspects of the game were disappointing for a Kansas team that was celebrating Senior Day at David Booth Kansas Memorial Stadium. Kansas will now head into the Sunflower Showdown on the road against Kansas State next week with a 6-5 record, while Texas will go into their final regular season game at 7-4 and a home meeting with Baylor awaiting.

Texas running back Bijan Robinson showed why he started the season as a Heisman contender, first team all-Big 12 performer, and potential first round NFL draft prospect. After a first half that consisted of 172 yards on 19 carries that resulted in three touchdowns (a fourth was called back due to holding), Robinson continued his run of terror on the Jayhawks defense as the second half began. He took his 22nd carry of the game 31 yards for his fourth touchdown of the day. Head coach Steve Sarkisian smartly took him out of the game after one more offensive possession and Robinson ended the game with 243 yards and four touchdowns.

2. Jalon Daniels Gets the Start at Quarterback For Kansas

He didn’t look like the Jalon Daniels from the first five weeks of the season, when the Jayhawks quarterback led his team to a 5-0 start and also kick-started an early Heisman trophy conversation for himself. Despite having the ability to make plays with his legs, he held back that part of his game, likely to preserve his health. It clearly affected the offense and Kansas’ ability to put anything together.

Jason Bean was injured at the end of last week’s game against Texas Tech and that could have played a part in the decision to keep him out of the starting lineup. However, Bean was inserted into the game midway through the fourth quarter and got a couple of series as the game was out of reach.

Kansas was officially eliminated from Big 12 Championship Game contention with the loss, but the win for Texas keeps them alive for one more week. The Longhorns will host Baylor on Friday, November 25th, and will need to win that game. Texas fans will need to turn around and root for the Jayhawks as they need Kansas to upset Kansas State on the road next Saturday, November 26th. Texas also needs Oklahoma State to lose tonight at Oklahoma or next weekend when the Cowboys host West Virginia.