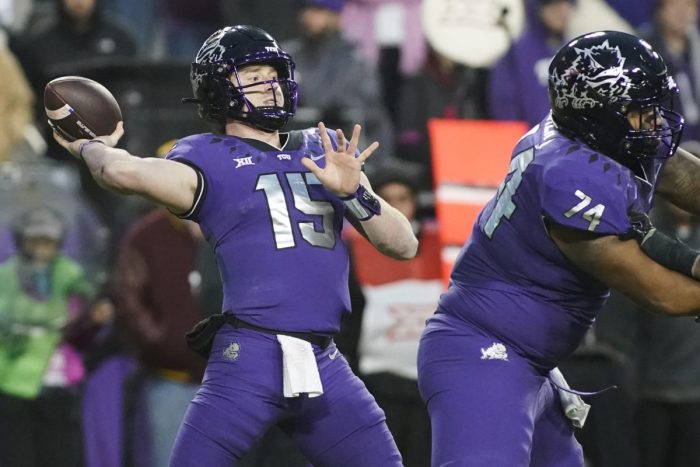 Week 13 of the Big 12 football season is in the books as the college football season wrapped up the regular season this weekend. There were five games this week, with Texas beating Baylor 38-27, West Virginia got by Oklahoma State 24-19, TCU crushed Iowa State 62-14, Texas Tech got by Oklahoma 51-48 in overtime, and Kansas State rolled Kansas 47-27.

So with another wild week in the books, here are the five biggest takeaways from Week 13 in the Big 12 Conference.

1. The Big 12 Championship is Set, and People Will Watch

The Big 12 Football Championship Game is all set for Saturday as TCU will take on Kansas State and the Big 12 will have a first-time winner of the Big 12 Championship Game since its return in 2017. TCU blew out Iowa State on Saturday, while K-State handled its business against Kansas.

Of course, TCU is undefeated and likely has a spot in the College Football Playoff on the line on Saturday. And despite what clown show Paul Finebaum said last week, when he said he would not be watching the Big 12 Championship Game closely, obviously his employer ESPN feels differently, as they will be taking College GameDay to the Big 12 Championship Game on Saturday. So despite what Finebaum believes, obviously ESPN thinks people will watch.

The Cowboys were 6-1 to start the season ranked in the Top 10. Then, they got ripped by 48-0 by Kansas State and then ended the season losing four of five games. And each of the four losses, to Kansas State, 37-16 to Kansas, the disappointing 28-13 Bedlam loss and now WVU, were pretty ugly. From 6-1 to 7-5 is a disappointment by anyone’s standards in Stillwater.

The Cowboys go into the offseason (after their bowl game) with arguably more questions than answers. The defense showed some improvement, but still had big holes this season, the offensive line was a mess, which of course impacted the running game dramatically.

At quarterback, Spencer Sanders could return in 2023, but based on what Mike Gundy said this week, it seems like Sanders is gone and they’ll have to turn over a new leaf at the position.

Other teams that closed out very disappointing seasons were Oklahoma, Baylor and Iowa State. All three lost on Saturday to close out the regular season. While OU and Baylor are still going to bowl games, 6-6 seasons for the two teams many predicted had the best chance to reach the Big 12 Championship Game is not close to meeting their expectations. Brent Venables has somewhat of an excuse as he is rebuilding the program in Year 1 after the Lincoln Riley fiasco. He has a strong recruiting class coming in as he tries to get OU football back to prominence. As for Dave Aranda, as good as the 2021 season was as Big 12 Champs, this season was just as big of a letdown.

Meantime, Iowa State fans hoped that while the season did not meet expectations, they would put up a fight against undefeated TCU. Instead, they played arguably their least-inspirational game of Matt Campbell’s six-year tenure in Ames. That one will leave a sour taste in fans’ mouths for the next several months. This was the worst season in nearly a decade (2014) when the Cyclones went 0-9 in league play.

The Horned Frogs could not have asked for a better outcome of games on Saturday in Week 13. Not only did they absolutely destroy Iowa State, reminiscent of the 2014 55-3 blowout of the Cyclones, but the rest of the games in the Top 10 (mostly) went according to plan. Michigan blasted Ohio State on the road, which should completely eliminate Ohio State from the CFB Playoff conversation, despite what Big Ten commissioner Kevin Warren said on Saturday. LSU is also removed from the conversation, which takes LSU out of the picture as a long-shot since they now have three losses. South Carolina upset Clemson, leaving the Tigers on the outside looking in.

Yes, USC beat Notre Dame and Alabama rolled Auburn, but for TCU, there is a case to be made that their resume is better than Ohio State’s with a loss to Kansas State, who could very well jump into the Top 10 come this week’s rankings. That’s not the scenario TCU wants to have to deal with, but that path does exist.

There was a report from ESPN earlier this week that said Neal Brown was “likely” to return for the 2023 college football season. Now, Brown and the Mountaineers wrapped up the season with two wins in their final three games, and their two wins against Oklahoma and Oklahoma State were as big underdogs (more than a touchdown).

Is that enough to save his job? Was it ever in serious danger? WVU has to still hire a new AD after firing Shane Lyons, but with the Early Signing Period in mid-December and a Top-35 recruiting class coming in, that, along with these two wins, and a buyout pushing $20 million, might be enough to keep Brown in Morgantown at least one more season, despite a 22-25 record in four seasons.