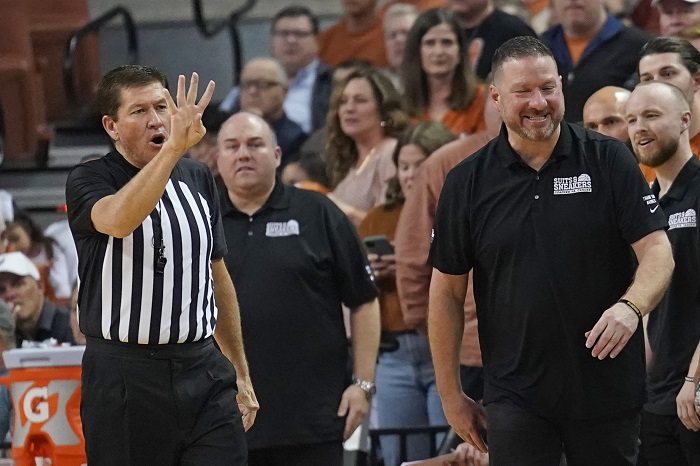 Four Big 12 teams remained among the nation’s best as the Associated Press Men’s Basketball Top 25 was released after the season’s third week of games.

Iowa State at No. 23 (the Cyclones were not ranked last week).

Five other Big 12 teams received votes — TCU with 45, West Virginia with 14, Texas Tech with 11, Oklahoma with two and Kansas State with one.

In an added boon to the future of the Big 12, Houston — which joins the league next fall — moved to No. 1 after North Carolina lost to Iowa State and Alabama last weekend.

Texas (5-0) played just one game last week. Moved into the top spot among Big 12 teams after winning two games last week — 73-48 over Northern Colorado and 91-54 over UT-Rio Grande Valley. The Longhorns have one game this week, but it’s a significant one as they host nationally-ranked Creighton on Thursday.

Kansas (6-1) went 2-1 last week, as they played at the Battle 4 Atlantis Tournament. The Jayhawks beat NC State, 80-74, and Wisconsin, 69-68, before falling to No. 22 Tennessee, 64-50, in the championship game. Kansas’ 50 points were its fewest in a game in eight years. Kansas hosts Texas Southern on Monday and Seton Hall on Thursday.

Baylor (5-1) went 1-0 for the week. The Bears beat McNeese State, 89-60, at home. This week the Bears are on the road for both games. The Bears taken on Marquette on Tuesday and then face Gonzaga in Sioux Falls, S.D., on Friday.

Iowa State (5-1) went 2-1 for the week. The Cyclones cracked the Top 25 for the first time this season at the Phil Knight Invitational in Portland, Ore. The Cyclones beat two of last year’s Final Four participants — Villanova and North Carolina. The 70-65 win over UNC was the Cyclones’ third over the nation’s No. 1 team. The Cyclones lost to UConn in the championship game. Iowa State hosts St. John’s on Sunday.

Texas Tech (4-2) went 1-2 for the week. The Red Raiders were at the Maui Jim Classic in Hawaii and lost their opener to Creighton, 76-65. After walloping Louisville, the Red Raiders followed that with a loss to Ohio State, 80-73. Texas Tech returns home to host Georgetown on Wednesday as it hopes to return to the poll soon.