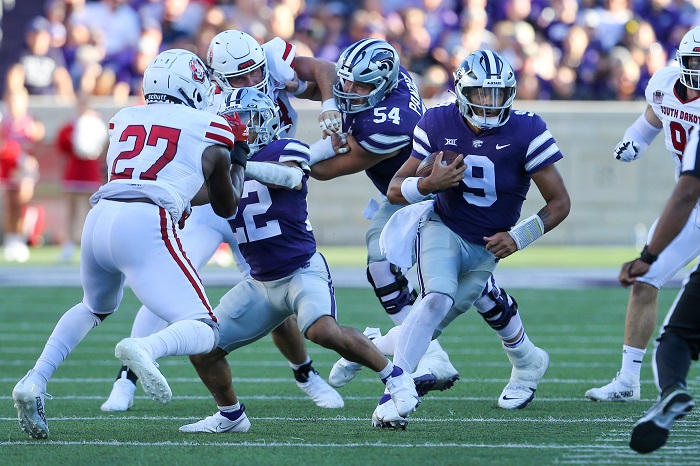 Never say never when it comes to Kansas State QB Adrian Martinez seeing the field in the Big 12 Championship game on Saturday against TCU.

According to Kellis Robinett of the Kansas City Star, head coach Chris Klieman said on Tuesday that Martinez could see the field on Saturday, calling it an “outside chance”, that the former starter is healthy enough to play against TCU.

Chris Klieman was quick to announce that Will Howard would remain the starter in the event Martinez gets healthy but did mention that Martinez could serve as the backup or even feature a special package to run out of. Will Howard has earned the right to start for the Cats against TCU, but having Martinez as an option in the event of an injury or otherwise provides an extra element of stability for K-State.

Martinez has been battling a knee injury during the back half of the season and in his absence, Will Howard has since led the Wildcats to the Big 12 Championship game. Martinez started the season off hot for the Wildcats before aggravating his knee against Iowa State, which has proven to leave a lasting impact on the signal caller.

The intriguing idea is to consider the trick play packages that Chris Klieman and Collin Klein have been drawing up. With two quarterbacks who have plenty of experience and confidence, it’s easy to imagine a scenario where we see Martinez rushing or receiving on some sort of trick play.

The Big 12 Championship game kicks off this Saturday at 11:00 a.m. at AT&T Stadium in Arlington Texas. Heartland College Sports is giving away tickets to the game and you can learn how to win them here.