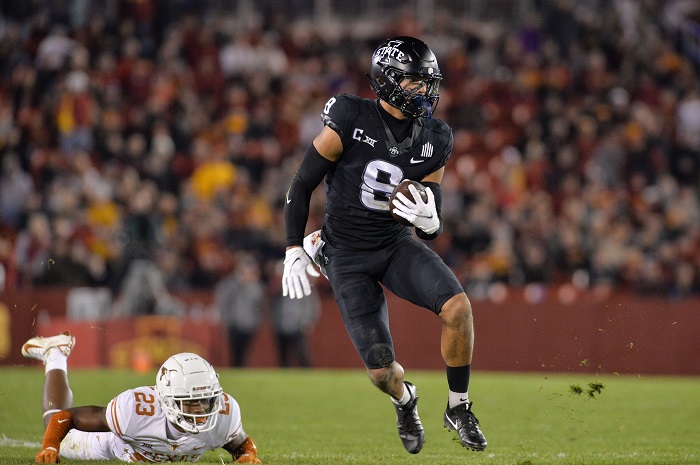 Iowa State senior wide receiver Xavier Hutchinson has been named as one of three finalists for the Biletnikoff Award, given annually to the nation’s outstanding FBS receiver regardless of position.

Hutchinson is joined by Ohio State’s Marvin Harrison Jr. and Tennessee’s Jalin Hyatt as the three finalists for the award.

According to a press release from Iowa State, Hutchinson broke his own school record with 107, leading the nation in receptions and receptions per game (8.9) during the regular season. Hutchinson is just one of two receivers in the nation to surpass 100 receptions this season and leads the Big 12 with 1,171 receiving yards.

Hutchinson caught at least eight passes in 11 of 12 games during his senior season and finished the year with six touchdown receptions, including the game-winner in Iowa State’s victory at Iowa.

In his three-year career, Hutchinson broke the Iowa State career record with 254 receptions and 13 100-yard games. He also posted a school-record nine games with 10 or more receptions. His 254 receptions were also a Big 12 record for three-year players.

Hutchinson reached the end zone 15 times in his career, tied for the fifth-most in Iowa State school history.

The winner of the Biletnikoff Award will be announced as part of the ESPN Home Depot College Football Awards Show on Dec. 8 at 7 p.m.