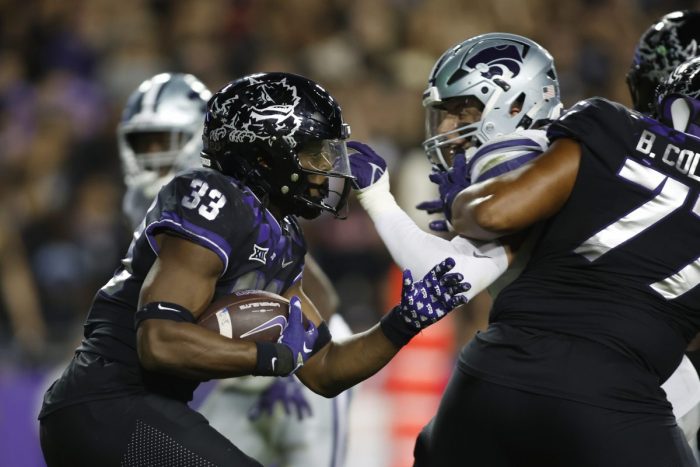 It’s important to note that the home team usually gets three points by default when Vegas sets its line, while a neutral site is typically a better indicator of who the linemakers think is the better team in a given matchup.

With that in mind, the Heartland College Sports staff will make their final pick of the Big 12 football season. Despite this being one of the most unpredictable conferences in the country, the HCS staff has been pretty good with its picks, going 27-22-1 on the year. Let’s see if they can improve on that number with their final picks of the year.

While it is closer than many would’ve guessed, I think TCU is able to sneak out of Arlington with a narrow victory and lock itself into a College Football Playoff semifinal. Max Duggan and the TCU offense looked explosive last week against the best defense that the Big 12 has to offer, and now they will reportedly get wide receiver Quentin Johnston back in the fold. That, combined with how the Horned Frogs’ defense has played of late, makes this team capable of winning more than just a Big 12 title, but perhaps a playoff game as well. Now, don’t get discouraged K-State fans, the Sugar Bowl is likely your destination with a win or a loss, so you will get a chance to go 2-0 against the SEC in the same season. That, if nothing else, is a reason to be excited for what comes next. As for TCU, a date with Michigan seems likely, and that is a game that the Horned Frogs have more than a fair shot at winning.

When games are a coin flip, I look for a couple of things and veteran leadership is at the top of the list, especially in a game of this magnitude. And clearly, TCU has the edge with Max Duggan over Kansas State’s QB Will Howard. Howard has played great in taking over for Adrian Martinez, but this is the biggest game of his life by far, plus his strong performance down the stretch was against Baylor, West Virginia, and Kansas, some of the worst defenses in the Big 12. Now comes TCU, who has the No. 2 defense (in terms of efficiency) in the league, behind K-State. Duggan also has a healthy Quentin Johnston and goes up against a Kansas State secondary that is banged up. It should be a great game, but give me TCU to win and cover the spread.

As the Big 12 Championship game is now always a rematch (at least until, potentially, next year when the league expands to 14), it’s important to look at history. The team that lost the regular-season matchup has won the title game rematch three out of the last four times. That would lead one to believe that Kansas State would win. One might also anticipate that because the game is in Arlington, which is just minutes down the road from Fort Worth, this would be a pseudo-home game for the Horned Frogs. That probably won’t be the case. Kansas State’s fan base is legendary for how it travels. So why take TCU here? The Horned Frogs are, interestingly enough, peaking at the right time. They’ve handled all of the attention that has come with being one of three undefeated teams left with aplomb. They’ve taken the best of every team in the Big 12, including Kansas State, and won each game. TCU may fall behind early in this game — in fact, that’s how the first game went. But TCU has always been a second-half team this season, and their ability to run the ball with quarterback Max Duggan, running back Kendre Miller and running back Emeri Demercardo, will ultimately win the day.

The Frogs have made it this far without a loss. They are the first Big 12 team since 2009 to go 12-0 in the regular season. While TCU already took care of Kansas State earlier in the season, that was a different team because the Wildcats now have Will Howard at quarterback. However, this TCU team just keeps finding ways to win games. I think this one is going to be close and I will take Max Duggan once again willing his team to a victory late.

TCU Should be in College Football Playoff, Regardless of Saturday’s Outcome
K-State RB Deuce Vaughn Lands Porsche in NIL Deal
To Top