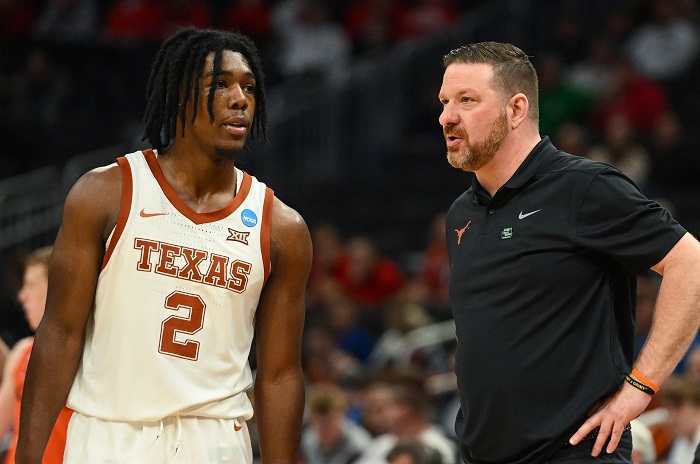 The Texas Longhorns are No. 1 in the first Heartland College Sports Big 12 men’s basketball power rankings After Week 4 of the 2022-23 season. Our Power Rankings will appear every Monday.

Texas played just one game last week, but it was a 72-67 win over Creighton that was the Longhorns’ second win over an AP Top 10 team this season. There is no dispute right now about which team in the Big 12 is playing the best basketball. Illinois will take its shot at Texas in the Jimmy V on Tuesday.

A fairly easy week for the Jayhawks, who handled Texas Southern easily and then drew a pretty easy draw with Seton Hall in the Big 12-BIG EAST Battle. Jalen Wilson is playing great basketball right now while Kevin McCullar had his best game as a Jayhawk vs. the Pirates. Kansas’ next two games are huge — a road trip to Missouri and then a home game with Indiana, the latter of which which should be ranked.

Iowa State holds steady this week after beating North Dakota and then handing St. John’s its first loss of the season. Iowa State now has a 2-1 record against the Big EAST and a 1-1 record against ranked teams. Jaren Holmes has been as advertised for the Cyclones after his transfer from St. Bonaventure. The Iowa game this week is the Cyclones’ last big test before some tune-ups before Big 12 play begins.

I wrestled with the Bears and the Wildcats in these two spots, but ultimately decided to stand pat with Baylor at No. 4. That loss to Marquette was troubling, honestly, but Marqutte’s Shaka Smart has the Golden Eagles playing like his scrappy VCU teams. The win over Gonzaga was a nice bounce-back, but it was a game in which the Bears had to rally to win. Baylor now has a 2-1 record against ranked teams this season. The Bears won’t catch another one until Dec. 31.

Kansas State lost its first game of the season, falling to Butler on the road. It wasn’t a great game for Kansas State and losing to a three-loss Bulldogs team had me wondering if they had lost a bit of an edge. No worries. The Wildcats rallied back to beat Wichita State at home by five. The Wildcats don’t have a win over a ranked team yet, and that’s probably the differentiator I had to use to determine who was four and who was five. But, right now, I think the Wildcats are playing better than everyone below them.

Tech played just one game last week, but the Red Raiders took care of Georgetown at home. The Hoyas aren’t in the best shape, but the Red Raiders won by 14, which is what Texas Tech should do against a team like that. Their body of work and current play suggests a team that will have 10 wins by the Big 12 opener against TCU on Dec. 31.

TCU now looks like the TCU we were expecting, though the chemistry isn’t all the way there. But the win over Providence was significant in that the Horned Frogs beat a NCAA Tournament team from last year, and a team that can make the tournament this year. Mike Miles has picked up where he left off from the injury and the return of Damion Baugh is only going to make the Horned Frogs harder to deal with. Jackson State is next, followed by SMU.

The Mountaineers went to Xavier and lost, but the Mountaineers continue to impress me with their chemistry, which is well ahead of what I expected from a team with so many new pieces. The work of Jimmy Bell is worth watching inside. Foul trouble has been his most significant impediment, but he played 31 minutes against Xavier and had 12 points and six rebounds. That’s the sweet spot.

The Sooners went on the road to Villanova and pushed the Wildcats late into the game before losing by four points. To this point the Sooners have three consistent scorers in Grant Sherfield, Tanner Groves and Jacob Groves. The fourth appears to be Jalen Hall. But after that there’s a significant drop-off. I’m not sure this team is improved enough to get to the NCAA Tournament. At least not yet.

It’s not just that the Cowboys are the only team in the Big 12 with three losses entering the week. Like West Virginia and Oklahoma, there are chemistry questions. The good news for Oklahoma State is that they have a seriously balanced scoring ledger. Avery Anderson III may lead with 12.9 points. But seven players are averaging at least seven points per game. Anderson can be the alpha when needed, but that balance is going to come in handy in Big 12 play.