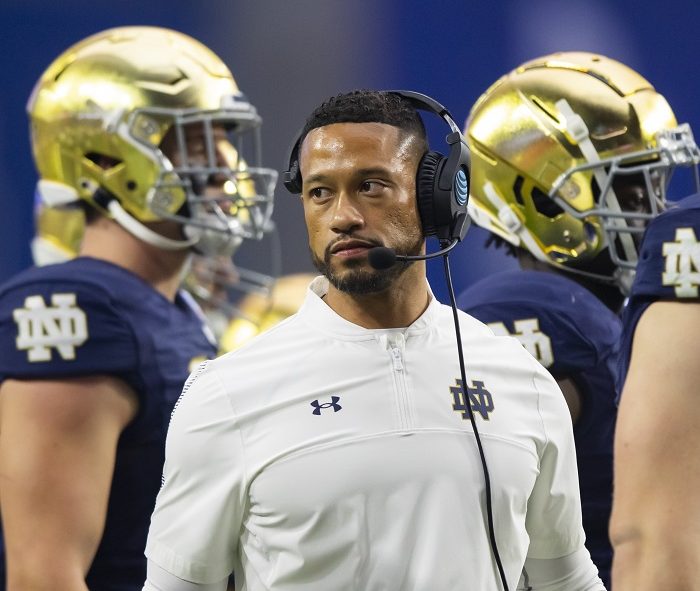 The recruiting saga of Derby (KS) running back Dylan Edwards continues to unfold as the four-star prospect decommitted from Notre Dame on Thursday.

Back in July, Edwards broke the hearts of K-State fans by opting out of his commitment with the Wildcats to re-open up his recruitment.

Around one week later, Edwards was officially committed to the Fighting Irish and looked to be headed to South Bend. Edwards had taken an official visit to Notre Dame on July 28th, decommitted from K-State on July 30, and committed to Notre Dame on August 6. It remained that way until December 8, just days before Early Signing Day, when Edwards announced his second decommitment of the year.

According to Bryan Driskell of Irish Breakdown, Dylan decommitted from the Irish for two reasons.

“The reason for Edwards’ de-commitment is two-fold” Driskell started. “According to sources, Edwards has been receiving significant NIL offers, and other sources indicate there was growing concern on that side of things that Notre Dame was loading up too much at both running back and wide receiver.

“Notre Dame already has two talented running backs in the class in Jeremiyah Love and Jayden Limar. Since Edwards committed as a hybrid player with a look at wide receiver, Notre Dame also received a commitment from Texas standout Kaleb Smith, who also projects as a slot receiver in the Notre Dame offense. Smith became the fourth receiver to commit to Notre Dame.

“That left Edwards in a position where his class was filling up at both positions that he was projected to play. Combine that with the NIL offers and it appears, according to sources, those two factors contributed to Edwards deciding to leave the class just two weeks before the early signing period opens.“

Edwards was the 2021 Gatorade Player of the Year in Kansas, putting up 3,214 all-purpose yards and 40 total touchdowns. During his senior season, Edwards ripped off another 1,900 rushing yards and 32 touchdowns while also adding 15 receptions for 227 yards and three touchdowns.