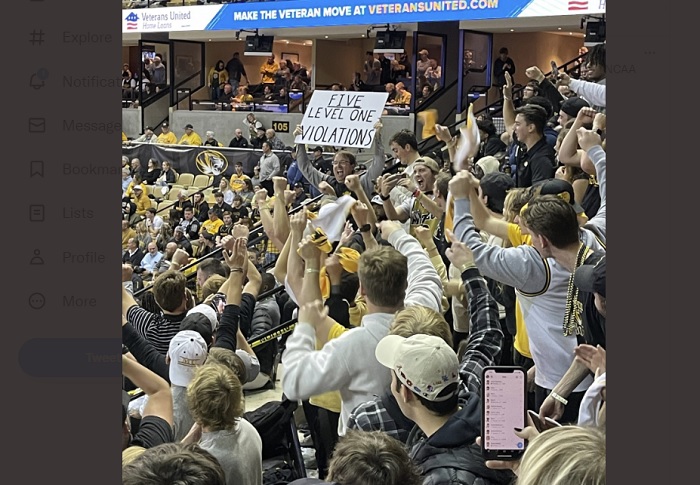 The Border War was renewed on Saturday on the basketball court between Missouri and Kansas in Columbia.

The Jayhawks came to town for one of the biggest rivalries in college athletics and even coaches from other sports got in on the action. Missouri football coach Eli Drinkwitz was seen holding up a sign to troll KU that said, “Five Level One Violations”.

Of course, this in in reference to the NCAA investigation that took place over the last couple of years involving several Division I programs, including the Kansas Jayhawks.

And here’s a look at a photo of the sign.

What’s interesting is that Drinkwitz is apparently a big talker from the stands of a game in a sport he doesn’t coach, but when he had the chance to play Kansas in the Liberty Bowl in a few weeks, Drinkwitz and the Tigers were apparently the ones who were too chicken to make that happen. Now Eli Drinkwitz has denied those reports, but you would think he might try to keep a slightly lower profile given the fact that he could have come out and said, “Yes, let’s play the Border War,” and he didn’t do that.

Mizzou is paying this guy $6 million per year to be a super fan for the basketball team. Good work if you can get it.

Oh, and as for the game. Yeah, about that. Kansas rolled 95-67. The only ones violated on Saturday were the Tigers and their entire fan base.