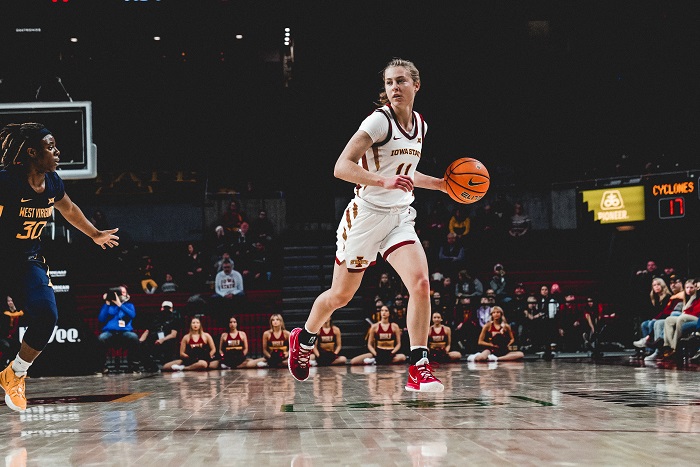 The Kansas Jayhawks, thanks to their win over Arizona, have surged in ESPN’s most recent Bracketology for the Women’s NCAA Tournament next March.

The Jayhawks, undefeated and ranked for the first time this season, surged to a No. 5 seed after being a No. 7 seed last week, thanks to the dominant win over the Wildcats. Per ESPN, this is the highest seed the Jayhawks have ever had in the site’s Bracketology field.

The Big 12 had five teams in the field for the second straight week, with a sixth team out of the field.

Iowa State, No. 4 seed in the Seattle Region

Baylor, No. 5 seed in the Seattle Region

Oklahoma, No. 5 seed in the Greenville Region

Kansas, No. 5 seed in the Greenville Region

Kansas State, No. 8 seed in the Seattle Region

The sixth team is Texas, which is the third team out of the tournament field. The Longhorns, oddly enough, will face the first team out of the field when they play USC on Sunday in Dallas. Texas will do so without Aaliyah Moore, who is out for the season with a torn ACL.

Iowa State dropped two spots after its loss to Iowa in the Cy-Hawk but remained the highest-seeded Big 12 team. As a No. 4 seed, the Cyclones would host a sub-regional and face Bowling Green in the first round.

Baylor, Kansas and Oklahoma are all No. 5 seeds this time around. Baylor got some good news, as forward Aijha Blackwell announced that she will be back from injury at some point this season. The Bears would face South Dakota State in the first round. The Jackrabbits beat Kansas State last week.

Kansas State took a one-seed dip thanks to its loss to the Jackrabbits. Kansas State would face Middle Tennessee in the first round, and then a potential matchup with top-seeded Ohio State in the second round.