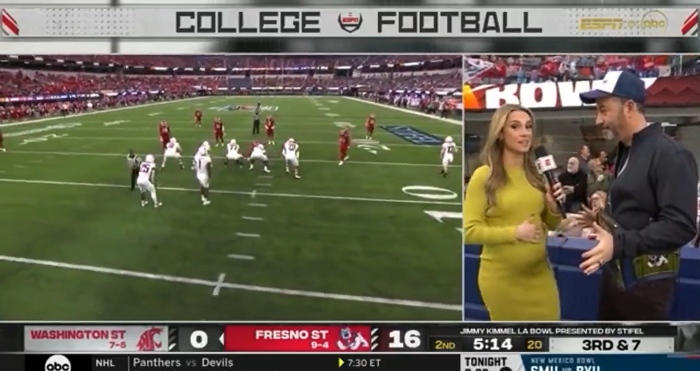 You know there are too many bowl games when one of them is named after Jimmy Kimmel. Yes, you read that right. There is a bowl game named the Jimmy Kimmel LA Bowl. It featured Washington State and Fresno State on Saturday afternoon.

And Kimmel kept true to himself by putting up multiple weird and unfunny moments, but nothing topped this awkward exchange with sideline reporter Molly McGrath, who is pregnant.

Kimmel asks McGrath if he is offering naming rights for the baby, playing off of the fact that bowl game sponsors are up for grabs and are as ridiculous as, well, the Jimmy Kimmel LA Bowl.

McGrath tries to play along and says she would be interested at the right price, to which Kimmel responds, “Just for the record I said naming rights to the baby, I don’t actually want another baby.”

The whole thing is just straight-up cringe. Then again, that’s what Kimmel’s so is every night, so maybe this is very much on brand.

Take a look below.

Oh, and for those who care, Fresno State beat Washington State 29-6.

The Big 12 Conference Has the Best Bowl Win Percentage Past Two Seasons
Kansas Remains No. 1 in Women’s Big 12 Power Rankings
To Top