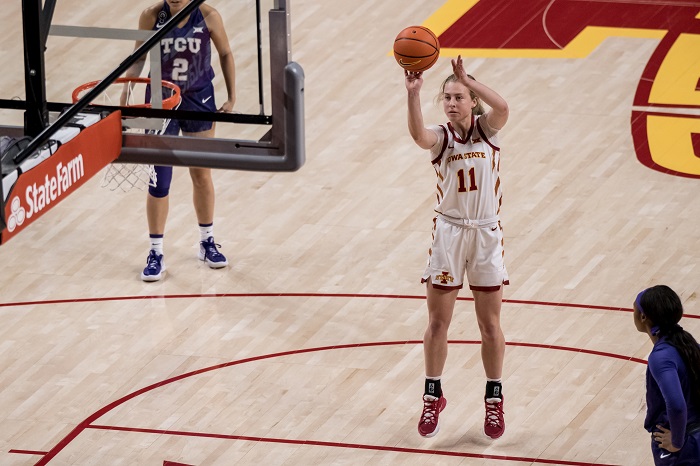 The sixth week of Big 12 women’s basketball is in the books. Here are three takeaways from the week, including updates on Iowa State, Baylor and Texas Tech.

Entering Sunday’s Hall of Fame Showcase Game with No. 25 Villanova, the only knock on ISU’s season to this point was its two losses were against ranked teams.

Well, let’s knock that off the list after the No. 14 Cyclones won, 74-62, over the Wildcats. This was a win, frankly, the Cyclones needed.

What worked well for Iowa State on Sunday was balance. All five starters hit double figures. Guard Denae Fritz had a career day with 13 points. Three different players had double-doubles — guard Emily Ryan with 16 points and 10 assists, center Stephanie Soares with 14 points and 11 rebounds and the newly-minted ISU graduate Ashley Joens with 17 points and 10 rebounds. Heck, Ryan was a rebound away from a triple-double.

Still, one thing worries me going into Big 12 play and that’s depth. Iowa State played seven players at least 10 minutes on Sunday. Nyamer Diew and Morgan Kane each got 12 minutes. Maggie Espenmiller-McGraw got four minutes. This is a team talented enough to reach the Final Four. But, they need some of that depth to step up and give the starters a bit of rest. Forward Beatriz Jordao is back and that should help. But three players logging 38 minutes or more each game — as Lexi Donarski, Joens and Ryan did on Sunday — won’t work.

Iowa State got some ‘breaks’ last season in Big 12 play with a few teams that were down compared to previous seasons. Those breaks are nearly non-existent this season. Just about every Big 12 team that struggled last season is much better this season. Iowa State needs to find a way to work out an eight- or nine-player rotation that will keep their stars fresh, or as fresh as possible come March.

Baylor got some great news last week when guard Aijha Blackwell announced she was close to returning from her knee injury. Turns out she came back the next game after she made the announcement and put up 11 points in nine minutes off the bench against Tennessee State.

Clearly, Baylor is easing her back into the rotation. She was a starter before the injury, and you’re not going to make Blackwell a sixth player when she had back-to-back seasons where she averaged a double-double at Missouri. But, she doesn’t need to start right now. She needs to get back into shape. That’s why she came off the bench again in the Bears’ loss to Arizona in the Pac-12 Coast-to-Coast Challenge. It’s also why she didn’t look as sharp and scored just xx points.

Besides, for now, the Bears have what Blackwell does well covered. Caitlin Bickle grabbed 11 rebounds against Arizona. Darianna Littlepage-Buggs and Bella Fontleroy have snagged three different Big 12 Freshman of the Week awards. Jaden Owens has emerged as an impressive point guard. Oh, and Sarah Andrews and Ja’Mee Asberry can connect from deep. And if Jana Van Gytenbeek can do the same off the bench, that makes the Bears all the better.

The Bears are going to be trouble in the Big 12, and that’s without Dre’Una Edwards, who still hasn’t played a minute due to academic and athletic waiver issues. If Baylor gets her back, well, now we’re talking.

The team that I have to admit I’m not sure about is Texas Tech. The Lady Raiders are 9-1 and haven’t lost since their second game, a 69-63 loss at home to Jackson State. The next game was the next night and saw Texas Tech beat Colorado, 86-85, in overtime. Since then? The Lady Raiders have been on cruise control. One game has been decided by single digits. The caveat is that all of those games have been against non-Power 5 teams.

What’s to like? Well, Bre’Amber Scott is back to scoring (12.8 points per game). Rhyle McKinney’s game has taken a step forward (she leads the Lady Raiders with 13.7 points per game). Freshman Bailey Maupin has made an immediate impact (12.9 ppg) and is hitting 40 percent from the 3-point line (we would be remiss if we didn’t note that McKinney is shooing 50 percent from there). Center Jazmaine Lewis has taken a big step forward, and guard Jasmine Shavers — who transferred to TTU in November of last year — has shown signs she was worth the wait.

What’s to worry about? Scott is the leading rebounder (5.8). You’d prefer that to be Lewis, though she’s hauling in nearly five per game. Coach Krista Gerlich would probably like to see the Lady Raiders cut down on their 15 turnovers per game. Katie Ferrell, a player that Gerlich has trust in from their time together at UT Arlington, has missed the last month with an arm injury.

Last season Texas Tech started 2-3 in Big 12 play, including a big road win at Texas. After that, they lost seven straight, which basically took the win out of its sails. The Big 12 schedule did the Lady Raiders few favors. Three of their first four games are against ranked teams (Iowa State, Kansas and Oklahoma), along with TCU. After that, the Lady Raiders get Kansas State and Texas. If the Lady Raiders are 3-3 at the end of that stretch on Jan. 18, that would be a good sign entering the next third of the league slate.