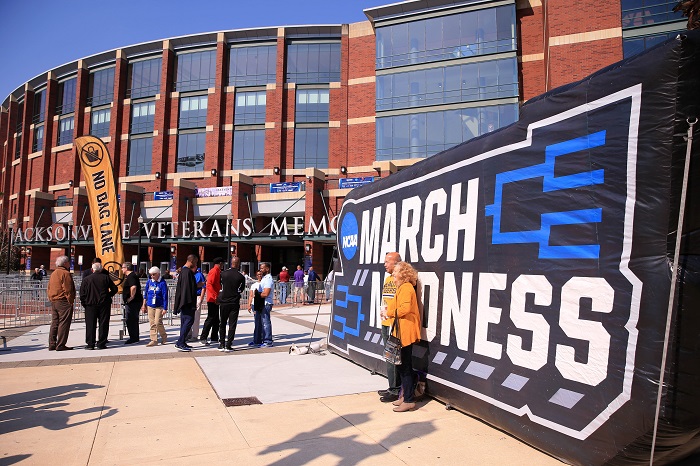 For the fourth straight week, nine Big 12 men’s basketball teams made the cut in ESPN’s Bracketology for the Men’s NCAA Tournament next March.

The only team that wouldn’t be in the field if the tournament started today would be Oklahoma State. Last week the Cowboys were one of the Top 8 bubble teams. But after losing to Virginia Tech, the Cowboys have fallen fell off the board entirely. But, after a undefeated week the Cowboys are now the second team among the First Four Out.

The bigger news is that Kansas moved onto the No. 1 seed line, one week after Texas fell off that line. Kansas has blown out opponents in each of its last two games — its ‘Border War’ game with Missouri and then last Saturday’s contest with then-No. 14 Indiana.

Kansas, No. 1 seed in the Midwest Region (Kansas City)

Baylor, No. 3 seed in the West Region (Las Vegas)

Texas, No. 4 seed in the South Region (Louisville)

Iowa State, No. 8 seed in the South Region (Louisville)

TCU, No. 10 seed in the South Region (Louisville)

Kansas State, No. 10 seed in the Midwest Region (Kansas City)

Oklahoma, No. 11 seed in the South Region (Louisville)

Kansas moved up a seed line after dominating Indian. The Jayhawks face ranked Indiana on Saturday. Kansas would play either SIUE or Nicholls State in the first round.

Baylor stayed on the same seed line from last week and would play UC Irvine in the first round.

Texas dropped a seed line despite winning two games last week in the wake of the suspension of head coach Chris Beard after his arrest last Monday morning on third-degree felony assault charges. Texas would play Oral Roberts in the first round.

West Virginia surged once again, as the Mountaineers moved from a No. 6 seed to a No. 4 seed this week. The Mountaineers would play Yale in the first round.

Iowa State held steady as a No. 8 seed. The Cyclones would play Utah State in the first round.

Oklahoma and Texas Tech are both No. 11 seeds. The Red Raiders would play Xavier in the first round, while Oklahoma would face Creighton in a First Four game.

Houston is the only future Big 12 team in the field and the No. 2 seeded Cougars would face Norfolk State in the first round.