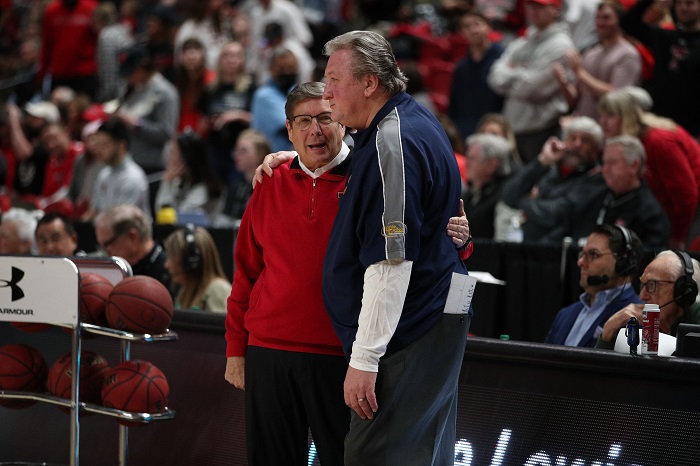 For the fifth straight week, nine Big 12 men’s basketball teams made the cut in ESPN’s Bracketology for the Men’s NCAA Tournament next March.

But will it be that way next week as Big 12 play begins this weekend? Here are three thoughts on ESPN’s latest Bracketology from a Big 12 perspective.

How Much Longer at Nine?

I think we all know that nine Big 12 teams in Bracketology — and for that matter, the NCAA Tournament — is probably unsustainable. There would have to be a tremendous amount of parity to accomplish that, and with a double round-robin schedule, someone has to fall out at some point.

The most likely candidate going into the weekend is Texas Tech. The Red Raiders are a No. 12 seed, playing in a First Four game against Iowa and one of the Last Four In. The Red Raiders catch TCU on Saturday (I’ll be there for that one) as the Horned Frogs try to improve on their current No. 8 seed, which would pit the Horned Frogs against San Diego State and in the same region with UConn.

If the Red Raiders lose on Saturday, I think they fall out of the Field (for now). One thing to keep in mind? Every Big 12 team is in the Top 60 in NCAA NET. Right now, that means every Big 12 game is a Quad 1 or a Quad 2 game, and a road win is a Quad 1 win. So, if Tech wins on Saturday, that is of immense help to them, especially since so few Big 12 teams have played true road games to this point.

In fact, thanks to their swift rise — the Mountaineers were a No. 8 seed just a few weeks ago — they have the most room to maneuver of any team in the conference that might fall out of the Tournament field (I’m locked in on Kansas, Baylor and Texas making it). One loss on Saturday won’t hurt WVU. This team looks better than last year’s 4-14 Big 12 team, one beset by problems from the start of league action. Now they have to show it in the Big 12.

The Cowboys, right now, are one of the First Four Teams out of the Tournament. Don’t let that fool you. A loss to Kansas on Saturday could slide them back to the Next Four out. The Cowboys have more losses (four) than any other Big 12 team, and you can see the difference with where Oklahoma (three losses) is at — one of the last four byes and a No. 10 seed.

The Cowboys can get in (and I have a story coming later this week with data that shows how). But they can’t stumble out of the gate in Big 12 action. A loss on Saturday doesn’t kill their chances. But a few early losses in Big 12 play might.

Baylor, No. 3 seed in the East Region (New York City) vs. UMass Lowell in Denver, Colo.

Texas, No. 3 seed in the West Region (Las Vegas) vs. UC Santa Barbara in Denver, Colo. (Texas moved up from a No. 4 seed last week)

West Virginia, No. 4 seed in the South Region (Louisville) vs. Yale in Albany, NY

Kansas State, No. 9 seed in the West Region (Las Vegas) vs. Marquette in Sacramento, Calif. (moved up one spot from last week)

Texas Tech, No. 12 seed in the West Region (Las Vegas) vs. Iowa in a First Four game in Dayton, Ohio (dropped on spot from last week)

Oklahoma, No. 10 seed in the South Region (Louisville) vs. Mississippi State in Sacramento, Calif.