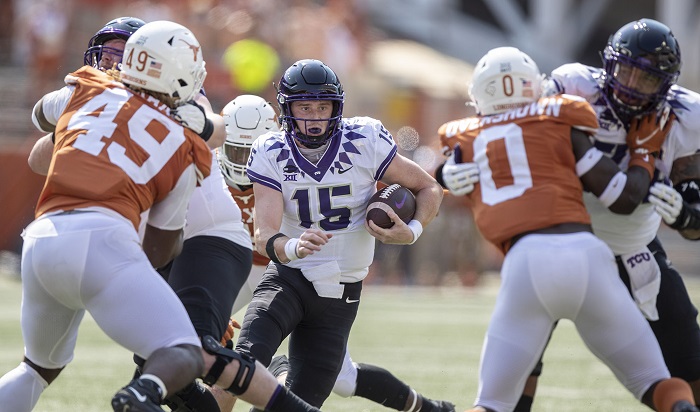 Count Michigan defensive back Mike Morris a Max Duggan fan, even if the Wolverines and the TCU Horned Frogs play each other on Saturday at the Fiesta Bowl.

Morris has seen more than enough film on Duggan to know he has to respect him.

“I love watching him,” Morris said on Wednesday during interviews leading up to the Fiesta Bowl. “He’s an exciting player to watch. Just willing his body and his team to win each and every game, especially in that Kansas State game, and I’m looking forward to playing him.”

Duggan started the 2022 season as the backup to Chandler Morris, even though he had been the starter for two seasons. When Morris was hurt in the season opener against Colorado, Duggan took over and never gave up the job.

He led TCU (12-1) to an undefeated regular season and a Top 4 national ranking before they lost to Kansas State in the Big 12 Championship Game, 31-28, in overtime. Even in the loss, Duggan earned national respect for rushing for 95 yards and a touchdown on the Horned Frogs’ 80-yard scoring drive to tie the game (yes, he rushed for 95 gross yards on the drive).

Duggan finished the season completing 64.9 percent of his passes for 3,321 yards and 30 touchdowns with just four interceptions. He also added 404 yards rushing and six touchdowns on the ground. He won the Davey O’Brien Award, named for a former TCU quarterback, and was second in Heisman Trophy voting. He declared for the NFL Draft earlier this month.

Morris apparently saw the Big 12 Championship Game file. He and the Wolverine defense also have a plan.

“I love playing guys who don’t quit, and I feel like that’s what he stands on,” Morris said. “I’m definitely looking forward to it. What I see on film is we just got to have A-level rushes. We can’t let him escape the pocket, outside of the pocket, can’t let him step up. The interior guys need to push the pocket and we need to close the pocket in and create a phone booth.

“Once we do that, I feel like he will be uncomfortable and won’t make as good of throws as he’s been doing. So that’s all we have to do.”

We will see if Morris’ plan works on Saturday.