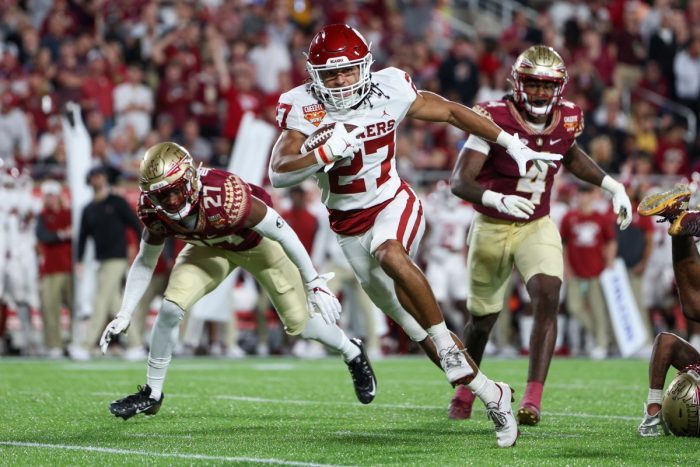 The Oklahoma Sooners jumped out at a 14-3 lead and had a 17-11 advantage at the half, but the second half was all Florida State as the Seminoles outscored Oklahoma 24 to 15 in the second half to win the Cheez-It Bowl, 35-32.

The Sooners played well given the missing pieces they had to replace tonight, but at the end of the day, Florida State proved to be too much in the end.

Here are three thoughts on the game and what it mean’s for the Sooners, who have suffered their first losing season since 1998.

Many times throughout the 2022 season, the Sooners have been in games late but have found new ways to lose them, and that trend continued tonight in Orlando. Oklahoma held Florida State to 11 points in the first half but ended up allowing 35 points and 587 yards to the Seminoles on the night and it ended in the Sooners’ seventh loss of the year. OU’s much-maligned defense showed an inability to keep the Seminoles in front of them as Florida State had chunk play after chunk play in the second half. Florida State quarterback Jordan Travis completed 27-38 passes for 418 yards and two scores on the night, with eight receptions and 202 of those yards going to 6-7, 235-pound wide receiver Johnny Wilson. Oklahoma’s defensive line wasn’t able to generate the pressure in needed to get Florida State out of rhythm, and it cost them the game. The Sooners lack defensive depth, and they were once again gassed heading into the fourth quarter. Same story, different game for the 2022 Oklahoma Sooners.

Dillon Gabriel is one of the best pure passers in the Big 12, but he can’t throw the football from his back. Oklahoma’s offensive line was missing both LT Anton Harrison and RT Wanya Morris, along with RG Chris Murray, C Andrew Raym, and OU’s backup LT Jacob Sexton got hurt on the Sooners’ first offensive drive. That meant that Oklahoma’s offensive line was young, inexperienced, and going up against one of the best pass rushers the ACC has to offer in Jared Verse. That, of course, culminated in seven sacks for the Florida State defense and caused the Oklahoma passing game to struggle. At the end of the night, Dillon Gabriel was 14-24 for 243 yards and one score, and was running for his life on most plays. Oklahoma will return Andrew Raym from injury in 2023 and will likely have some help on the way via the transfer portal, but with the type of pass rushers that the Big 12 has to offer, it had better hope it can replace Morris and Harrison effectively.

Promising Backfield for 2023 a Silver Lining for OU

Oklahoma entered this game without the services of several key players, none of those more impactful than the absence of running back Eric Gray. Gray ranked third in the Big 12 with 1,366 rushing yards and 11 rushing touchdowns on the season. However, in the Cheez-It Bowl, Oklahoma would have to rely on two true freshmen in Jovantae Barnes and Gavin Sawchuk. Both backs came into the 2022 season as highly-touted four-star prospects, but neither of them was heavily relied on with Gray’s stranglehold on the lead job. However, in their first meaningful action, the duo was spectacular. Despite the offensive lin being a patchwork unit, Oklahoma rushed for 253 yards in this game. Jovantae Barnes led the Sooners with 27 carries for 108 yards (4.0 ypc) and one score, while Sawchuk turned 15 carries into 100 yards (6.7 ypc) and one score. It’s a small body of work, but the Oklahoma backfield might be chock-full of young talent in 2023, even with Eric Gray headed to the NFL.

Alamo Bowl Preview and Prediction: Texas vs. Washington
Quentin Johnston’s Dad Talked Son Out of Transferring to Oklahoma
To Top