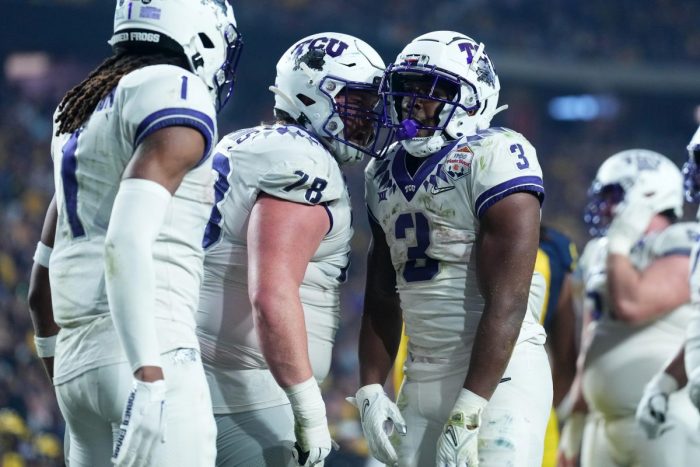 If you’ve watched TCU football all season, you know that running back Emari Demercado was capable of what he did in Saturday’s Fiesta Bowl.

He just hadn’t had that type of showcase until the College Football Playoff semifinal game against the Michigan Wolverines, a 51-45 victory.

“Emari is just that kind of player,” TCU coach Sonny Dykes said. “He’s one of those guys that has been here a long time. He’s been through a lot, a lot of highs, a lot of lows.”

Demercado has never had a high quite like Saturday night, and it came at the perfect time.

Kendre Miller’s second-quarter injury ended his evening prematurely. He had rushed for 57 yards, but his night ended with him failing to score a touchdown in a game for the first time this season.

With that, the Horned Frogs lost 1,399 rushing yards and 17 touchdowns.

For those that haven’t seen TCU this season, Demercado’s performance was probably a revelation. Dykes didn’t feel that way.

“He’s one of those guys that’s ready every week,” Dykes said. “When he gets the opportunity, he always makes the most of it. I’m not surprised that he did what he did tonight because that’s what he’s done all year when he gets an opportunity.

The senior from Inglewood, Calif. — where the Horned Frogs (13-1) will play Georgia (14-0) in the National Championship Game on Jan. 9 — has been Miller’s back-up all season. But Horned Frogs and Big 12 fans know that Demercado isn’t a typical back-up. He’s as physical a runner as Miller and, because of that, he normally gives Miller valuable possessions off.

When the second half began and it was clear Miller wasn’t coming back, it was up to Demercado to help the Horned Frogs continue its plan of running the ball down the gut of the Michigan defense. TCU ended up with 263 rushing yards to Michigan’s 186.

He didn’t just help the Horned Frogs. Demercado rushed for 150 yards and a touchdown, including a 69-yard run that helped set up a Max Duggan touchdown run that gave TCU a 41-22 lead in the third quarter.

The fifth-year Horned Frog had never rushed for 100 yards in a college game, much less 150. The closest he got was 90 yards against Oklahoma State last season.

Yes, Demercado did lose a fumble as the third quarter turned into the fourth quarter, which gave the Wolverines a chance to cut TCU’s lead to 41-38.

But TCU stuck with him. In fact, he was critical to helping TCU milk the clock in the final few minutes. His 7-yard run to the TCU 19 on second-and-8 set up a Duggan 2-yard sneak to move the chains with 1:40 left and force Michigan to use all of its time outs down six points.

It was a little thing, but that first down, combined with Jordy Sandy’s 50-yard punt, put the Wolverines at their own 25-yard line with 45 seconds and no time outs. Four plays later, the drive was over.

The Horned Frogs had the Big 12’s first CFP win.

And Demercado had a well-deserved turn in the spotlight, with his career night pushing him to a career-high 699 rushing yards in a season.

“I couldn’t be more proud of Emari and what he did and what he’s done all year,” Dykes said.

TCU vs. Georgia Championship Game Tickets Cost $650 to Get In
Watch: Max Duggan, TCU Return to Fort Worth to Raucous Crowd
To Top