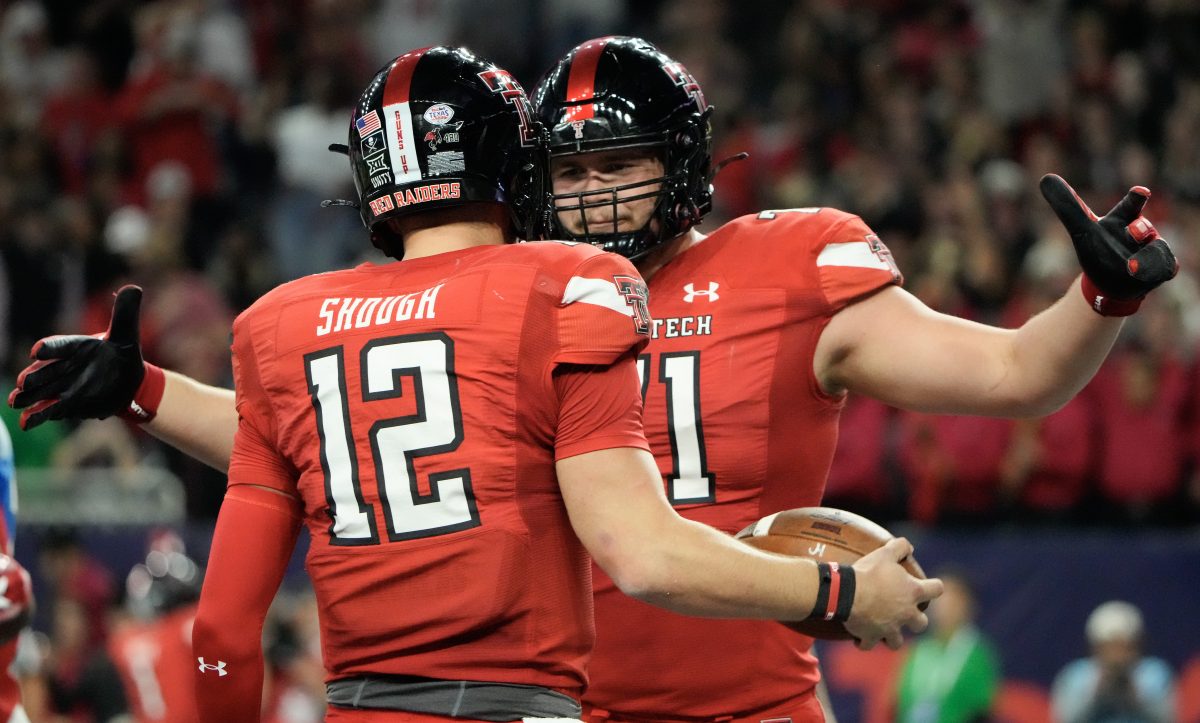 When Texas Tech demolished Ole Miss 42-25 last week, it finished off an impressive season for Texas Tech in year one of Joey McGuire. Tech ended the Big 12 slate with a winning record for the first time since 2009. Texas Tech beat both Oklahoma and Texas, in the same season, for the first time in program history. This was Tech’s first season with at least eight wins since 2013, and they finished it with a Bowl win. What’s more impressive is they did all this after being picked ninth in the Big 12, they played 11 teams who were ranked at one point this season, and they started three different Quarterbacks in at least four games.

While this season was an undeniable success for Texas Tech, and a massive boost for a program that desperately needed it, the same results next season won’t be enough. For 2023 the expectation should be to make it to a Big 12 Championship Game for the first time in program history. They appear to have their quarterback for next season with Tyler Shough, and a promising backup in Behren Morton. Plus the team should be more talented next season with how much the recruiting has improved the past two seasons under Joey McGuire.

A massive reason Texas Tech should be expecting to compete for the Big 12 next season is the talent they’ll return. On the offensive end, the key skill position players Texas Tech will lose are Donovan Smith, SaRodorick Thompson, and Henry Teeter. While I expect Donovan Smith to be successful at Houston, it became clear he wasn’t as much of a fit in Kittley’s offense as Morton or Shough. Thompson is a big loss to the running back room, but Tahj Brooks is still there, and young backs Cam’ron Valdez, and Bryson Donnell look to feature. Henry Teeter was certainly a capable Tight End, and important in many formations, but Mason Tharpp, and Baylor Cupp both seem to have more upside. On the offensive line, it was flat-out bad early this season but seemed to improve as the season came along, add another offseason and the addition of Cole Spencer, and they shouldn’t be a problem this season.

On the defensive side, there’s a glaring loss in the form of Tyree Wilson, who may go top 10 in the NFL Draft this year. While he won’t be easy to replace, it’s worth noting he was injured for the final three games, where Tech won a defensive battle in Ames, beat Oklahoma, and Ole Miss, where the front seven looked very good. Add in the Defensive Tackle duo of Jaylon Hutchings and Tony Bradford Jr., announcing they’d return for their super senior year, the defensive front should be dangerous. At linebacker, there’s a big loss in Krishon Merriweather, but plenty of young promising pieces around him. The secondary will suffer two losses, one in the shape of Reggie Pearsons who transferred to Oklahoma. That one shouldn’t be a huge concern for fans considering Tyler Owens seemed to be favored to start over him by the staff. Then there’s Muddy Waters who was a big piece, but for a team to just lose one starter on offense and three on defense is truly something college coaches would take every year.

Special teams seem murkier as kicker Trey Wolff won’t return, but punter Austin McNamara will, though Joey McGuire doesn’t love using either on fourth downs too much. Kick and punt returners will be interesting as well, this season Texas Tech lacked speed for that position, but considering all the track guys coming in, it wouldn’t shock me to see a true Freshman carve out a role in those positions.

Recruiting is also a key reason expectation in Lubbock is growing. A class of now mostly Redshirt Freshmen from 2022 ranked 42nd in the nation, and this 2023 class currently sits at 23 according to 247. Compare that with the four years before that: 2021 was ranked 74th, 2020 was 48th, 2019 was 62nd, and 2018 was 72nd. Two things can be true of this year’s Texas Tech team. First, they proved week in and week out, that they could cut it in Big 12 play, and proved that by finishing fourth. Also, this is likely to have been the least talented team Joey McGuire will have at Tech, there’s a reason they were picked ninth and a good margin behind West Virginia at eighth.

Joey McGuire implemented a much different recruiting strategy than past Tech coaches. It’s one that focuses on speed, physicality, and guys from Texas. Only a few players in this 2023 class hail from outside Texas, and he’s worked hard to build a wall around West Texas. Most notably in that he flipped Isaiah Crawford away from Baylor, who hails from Post, Texas, a small town about 45 minutes outside of Lubbock. While 2023 will mainly be about the older guys, the 2022 class should have a few guys come in and contribute, and hopefully a few from this most recent 2023 class.

Another big reason Texas Tech should be expecting to compete for the Big 12 Title, is the state of other teams. While there are many good teams in the conference, there’s plenty of reason to believe Texas Tech will have every chance to compete. Baylor has a thin QB room and is coming off a down season. TCU will still be good, but won’t have Duggan or Johnston, Texas lost both their top running backs. Oklahoma State is bleeding in the portal, and Oklahoma seems to be on the wrong track. Kansas State should return a lot, but Kansas, Iowa State, and West Virginia appear to be a long way off from contending. Sure there are four new schools, but Cincinnati lost their coach, BYU had a rough season and lost Hall. Tech won’t fear Houston, and UCF seems like a team with a few years to go until they compete for a Big 12 Title. Overall it appears to be a wide-open conference.

There are plenty of guys that decided to use their extra year of eligibility, and they didn’t do that to go to another bowl game. For the first time in a long time, Texas Tech has a group of players that are good enough to compete for a Big 12 title, and these players know it. For the past few years, the goal for Tech was to get six wins and go bowling, that’s not the case now. If Tech goes 8-4 and finishes third or fourth next year, many people will say it’s a success. But I’d bet the players in that locker room would look at it as them falling short. I thought when McGuire was hired maybe in 2024 they would compete for the conference, but this season bumped that up a year. Heck, even this season a win over Kansas State was all that separated them from Arlington.