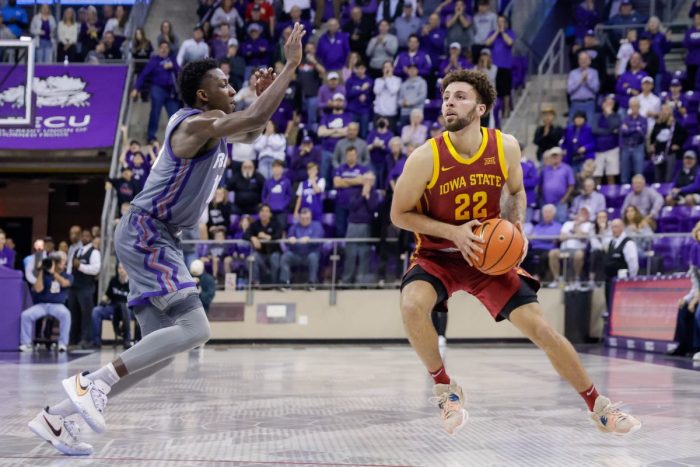 The No. 25 Iowa State Cyclones beat the No. 17 TCU Horned Frogs, 69-67, on Saturday at Schollmaier Arena in Fort Worth, Texas. Here are three thoughts on this Big 12 Conference game.

I wrote on my three thoughts on Big 12 basketball last Monday that the Cyclones need more Gabe Kalscheur.

I like it when I’m ahead of the curve. Roll the tape.

Kalscheur rescued the Cyclones with a step-back 3-pointer with less than two seconds remaining to clinch the win for Iowa State. He finished with 15 points. Three Cyclones had 10 points each — Tamin Lipsey, Robert Jones and Jaren Holmes.

So, yes, the Cyclones need more Gabe Kalscheur. Especially when it matters the most, as it did on Saturday.

Despite the job that Iowa State did on TCU defensively, the Horned Frogs made the most of their chances. Just 44 field-goal attempts? OK, TCU made 22 of them (50 percent, and seven were 3-pointers). TCU got to the free-throw line much more than Iowa State (28 attempts to nine attempts). TCU blocked nine shots to Iowa State’s four.

TCU got to the free-throw line three different times on three attempted 3-pointers. Miles did it twice in the second half with a, shall we say, questionable leg swing? Yes, he was absolutely contacted on those two plays by Kalscheur and Lipsey, respectively. But, Miles definitely nudged that leg out there.

I agree with Fran Fraschilla on this one. That play needs to be removed from the game. Miles isn’t doing anything wrong per the rules (at least not the letter of it, anyway). But an offensive player shouldn’t be allowed to initiate contact in that way against an airborne defender.

The Lipsey play was especially egregious because Lipsey was doing everything possible to stay on a straight line and avoid contact. Defensive players that make those kinds of plays shouldn’t be penalized for it.

I believe this coming offseason is one where they’ll make a full examination of the rules. I hope that’s on the list.