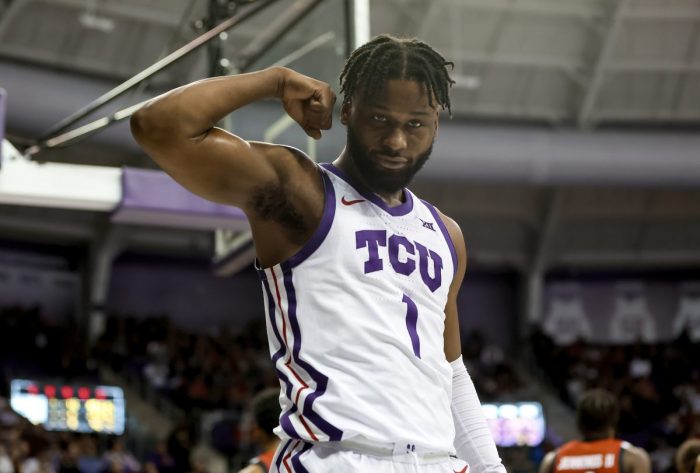 This is the second full week of Big 12 action, with games on Tuesday, Wednesday and Saturday. College basketball goes dark on Monday for the national championship game between TCU and Georgia.

Below you’ll find our top three Big 12 games of the week, our sneaky good game of the week, notes to watch, the week’s schedule with TV information and links to other useful college basketball information during the season. Plus, keep up with the site throughout the week for our Daily Fantasy Picks with Draft Kings on those nights when there’s a Big 12 team — or teams — in the pool.

TCU at Texas, Wednesday. TCU put together a big road win at Baylor and nearly outlasted Iowa State at home. Texas moves on without Chris Beard.

Iowa State at Kansas, Saturday. Well, I mean, everyone knows what happened the last time the Cyclones visited the Jayhawks, right?

Oklahoma State at Baylor, Saturday. This may be turning into a ‘blood-in-the-water’ moment when it comes to Baylor. They look vulnerable and Oklahoma State loves mucking up the works on the road.

G Adam Flagler, Baylor: It doesn’t matter who the Bears are playing, this guy is going to get it done, both as a scorer and as a passer (23/7 against Kansas State).

F Jalen Hill, Oklahoma: He scored eight points in overtime and 18 overall against Texas Tech. He also had nine rebounds. The Sooners need that output every 40 minutes.

G Damion Baugh, TCU: If you’re not paying attention to Baugh you’re missing out. He’s a well-rounded guard who has bought into being the backbone of TCU’s success.

G De’Vion Harmon, Texas Tech: With all the Fardaws Aimaq talk and the injuries to Daniel Batcho and Pop Issacs, thank goodness for Harmon’s experience and steady hand.

Kansas State. The Wildcats are enjoying a lot of prosperity right now, having won three straight games against ranked teams to start Big 12 action. Now, things start to get REALLY interesting. Why? Oklahoma State will be a stiff test because, on paper, this is a game where the Wildcats should be favored. Then, on Saturday, it’s a trip to TCU, which finally has its hands around its great expectations for the season. It’s one thing to build momentum, which K-State has done. Now, they have to sustain it. And, Kansas is right around the corner.