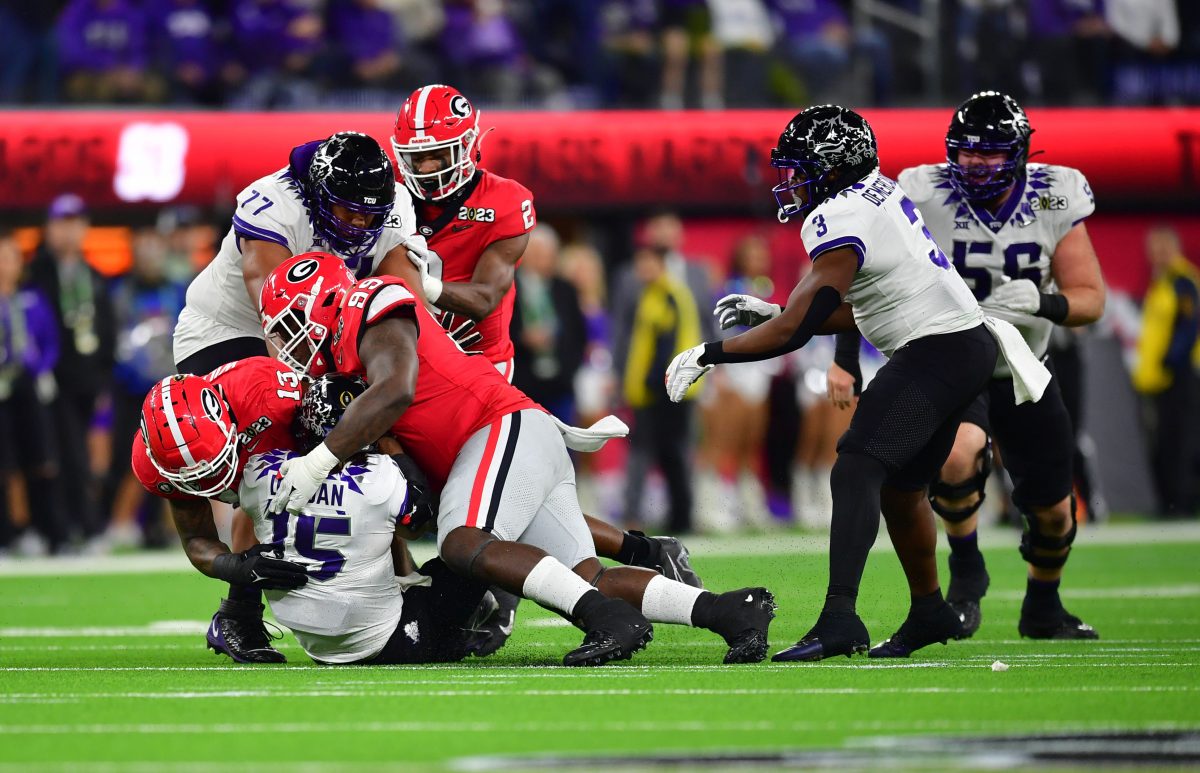 The college football season began back in August and the last game of the season took place on Monday night. The TCU Horned Frogs became the first Big 12 team to reach the College Football Playoff National Championship Game where they met the Georgia Bulldogs. Georgia was looking to win back-to-back national titles, while TCU was looking to win its first national championship since 1938.

But on Monday night from SoFi Stadium in Los Angeles, California, it was the Bulldogs who controlled this game from start to finish on their way to a dominant 65-7 victory over the Horned Frogs. With the win, Georgia becomes the first team in the College Football Playoff era to win two-straight national championships and the first since Alabama in 2011 and 2012 during the BCS era.

Here are four thoughts on the game.

Right from the start of this game, TCU had problems. It took Georgia just five plays to score on their first possession and that would be just the start of a very long evening for the TCU defense. The Bulldogs went on to score on all six of their first half drives as they put up 38 points in the first half. In the first two quarters of the game, Georgia had over 350 yards of offense as TCU showed no signs of slowing them down.

The Horned Frogs finally got their first stop of the game in the third quarter when Georgia punted for the first time all night. However, the scoring didn’t stop as the Bulldogs racked up 27 more points in the second half. Even the backups for Georgia found the end zone as most of their starters were pulled in the fourth quarter. If this game went on any longer, Georgia may have put 100 on the board. TCU’s defense wasn’t capable of stopping this offense.

2. The Offense Had a Rough Night

As bad as the defense was, the offense was right there with them. For months, TCU has relied on Max Duggan to make play after play, and he just couldn’t get anything going against the stout Georgia defense. The offensive line struggled to keep the Georgia defensive line out of the backfield as Max ran for his life back there. You could clearly tell that the speed of Georgia’s defense was a big problem for TCU’s offense. Duggan threw two interceptions and was sacked several times as well. What was really frustrating was seeing Quentin Johnson not even involved much in the game. The Bulldogs did a great job shutting him down and anything the Horned Frogs tried to do. I know TCU was without starting running back Kendre Miller but this was by far the worst performance they have had all season long and it came at the worst time.

It’s not often I praise opposing teams (especially ones from the SEC) but I must give credit to Georgia. They have been dominant all year long and are clearly the best team in college football right now. Some people including myself underestimated Stetson Bennett who just keeps proving everyone wrong. He played a heck of a game as he had six total touchdowns which earned him the MVP award. The Bulldogs are loaded with talent on both sides of the ball and Kirby Smart has done a great job with that program. I don’t care what anyone says because Georgia runs college football now with back-to-back national titles. Move over Nick Saban.

4. TCU Had a Great Season

Despite the result of the game, the Horned Frogs shouldn’t hang their heads. Nobody and I mean NOBODY was talking about TCU doing anything this year. They were picked to finish near the bottom of the Big 12 before the season started and Max Duggan wasn’t even the starting quarterback. Duggan went from being a backup to becoming a finalist for the Heisman trophy. Each and every week, this team found ways to win close games.

Even when people said that they couldn’t beat Michigan in the semi-finals, they proved the doubters wrong and wound up in the national championship game. They became the first Big 12 team in the playoff era to win a playoff game and became the first Big 12 team in over ten years to play for a title. This truly was a Cinderella type of year in Fort Worth that unfortunately didn’t end with a fairytale ending. I hate that it had to end in such an ugly fashion but hats of to TCU. They hade one heck of a season that will be remembered for years to come.

Fans Getting Injured Due to Slippery Floors at SoFi Stadium
Despite TCU’s Loss, The Big 12 Has A Bright Future
To Top