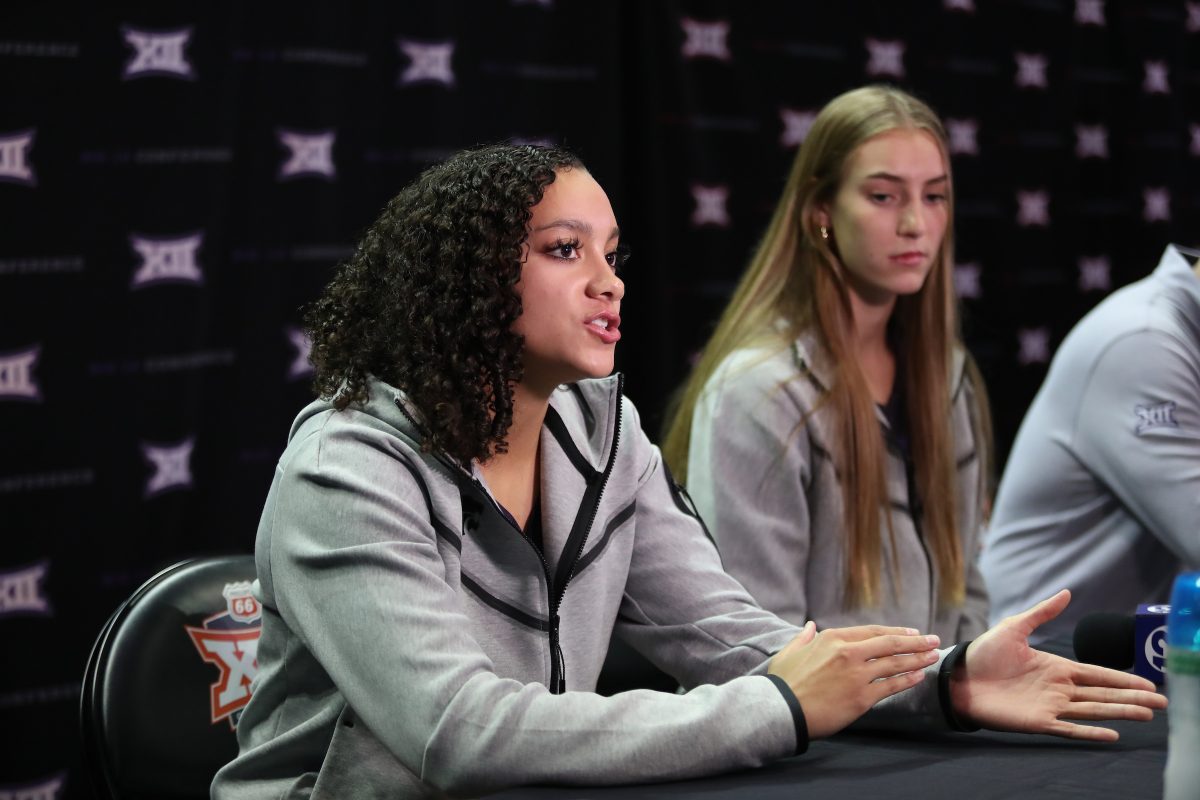 Big 12 women’s basketball just wrapped up its fourth round of games on Wednesday. Here are some numbers and notes to know going into the weekend games.

Baylor’s Sarah Andrews, who averaged 28.5 points, 3.5 rebounds, and 3.5 assists per game last week, was not only the Big 12 Player of the Week but the Naismith Trophy National Player of the Week. Forward Caitlin Bickle has three straight games of at least 10 or more rebounds and is third in the Big 12 in rebounding per game in four Big 12 games (10.3 per game). Baylor has had four players score in double figures in each of its past two Big 12 games.

With one rebound on Sunday against Texas, guard/forward Ashley Joens will become the school’s all-time leading rebounder. She is already ISU’s all-time leading scorer and she accomplished that benchmark in a game against Texas last season (h/t Austin American Statesman’s Danny Davis). … The Cyclones have the top two free throw shooters in the Big 12 through four league games — Emily Ryan (92.9 percent) and Lexi Donarski (91.7 percent). Joens is eighth (85.2 percent). ISU is the only team with three players in the Top 10.

Center Taiyanna Jackson leads all Big 12 women’s players with 10 double-doubles this season. She claimed the last one against Texas on Tuesday with 19 points and 12 rebounds in a 72-59 loss. Guard Holly Kersgieter scored 20 points against Texas, her fourth game of at least 20 points this season. She also moved into 17th on KU’s career scoring list with 1,319 points.

The Wildcats’ Jaelyn Glenn is the fourth Division I player this season to reach a stat line in a game with at least 15 points, 10 rebounds, five steals, two assists, and two blocks. She did that on Wednesday night against Iowa State (17 points, 10 rebounds, three assists, six steals, and two blocked shots). Guard Serena Sundell is the 18th player in program history with career numbers of 500 or more points, 250 or more assists, and 200 or more rebounds. She is the first Wildcat to reach these marks since Kayla Goth (2015-19). She also leads the Wildcats in blocked shots with 16. Last season Ayoka Lee led the Wildcats with 95 blocked shots.

In conference play, Ana Llanusa — who missed most of last season with an injury — leads the Big 12 in points per game during league play (23.8 ppg) and is tied for made 3-point field goals per game (3.3) with Baylor’s Sarah Andrews and Oklahoma’s Taylor Robertson. Oklahoma has the nation’s sixth-best offense (86.8 points per game), leads the Big 12 in assists (20.7 per game), and has the nation’s No. 14 assist-to-turnover ratio (1.29). OU will play its third straight-ranked opponent when it faces Kansas on Saturday.

When Oklahoma State defeated No. 18 Baylor on Wednesday, it marked the first AP Top 25 victory for the Cowgirls since they defeated No. 25 West Virginia, 57-55, on Jan. 22, 2020. It also marked the first Top 25 victory of coach Jacie Hoyt’s head-coaching career, which started with Kansas City in 2017-18. The win also snapped Oklahoma State’s 14-game losing streak to Baylor. It also marked OSU’s third Quad 1 victory this season (Florida State and Texas).

Against Texas Tech last weekend, Tomi Taiwo scored a career-high 33 points, the most by a TCU player since Lauren Heard scored 31 against Oklahoma in 2021. It was also the second-most points scored by a player in a Big 12 game this season. Her eight 3-pointers in that game were the most of any player in the Big 12 this season. Oklahoma State was one of two Big 12 teams the Horned Frogs beat last season (Jan. 12 in Fort Worth).

The Longhorns are preparing to play their second straight ranked opponent when they host Iowa State on Sunday. Texas has won its last six games against the Cyclones, dating back to Jan. 3, 2021. Texas is 12-7 at home against the Cyclones. Guard Rori Harmon leads the Big 12 in assists with 9.8 in the first four league games.

Bre’Amber Scott came off the bench for Texas Tech on Wednesday against Oklahoma and scored 23 points, the most for any player coming off the bench in the Big 12 this season. It was Scott’s third straight game with 20 or more points, a first in her six-year college career. Texas Tech scored 79 points in the 10-point loss to OU, the first time this season the Lady Raiders lost in a game in which they scored at least 70 points.

The Mountaineers gave up just four points to TCU in the first quarter of Tuesday’s game, tying the fewest points WVU has given up in any quarter this season (South Carolina Upstate, Nov. 10, 2022). The win marked the first home conference victory head coach Dawn Plitzuweit. The Mountaineers improved to 20-5 all time against the Horned Frogs, including 9-2 in Morgantown. West Virginia has now won nine of its last 10 meetings with TCU, dating back to Feb. 24, 2016.