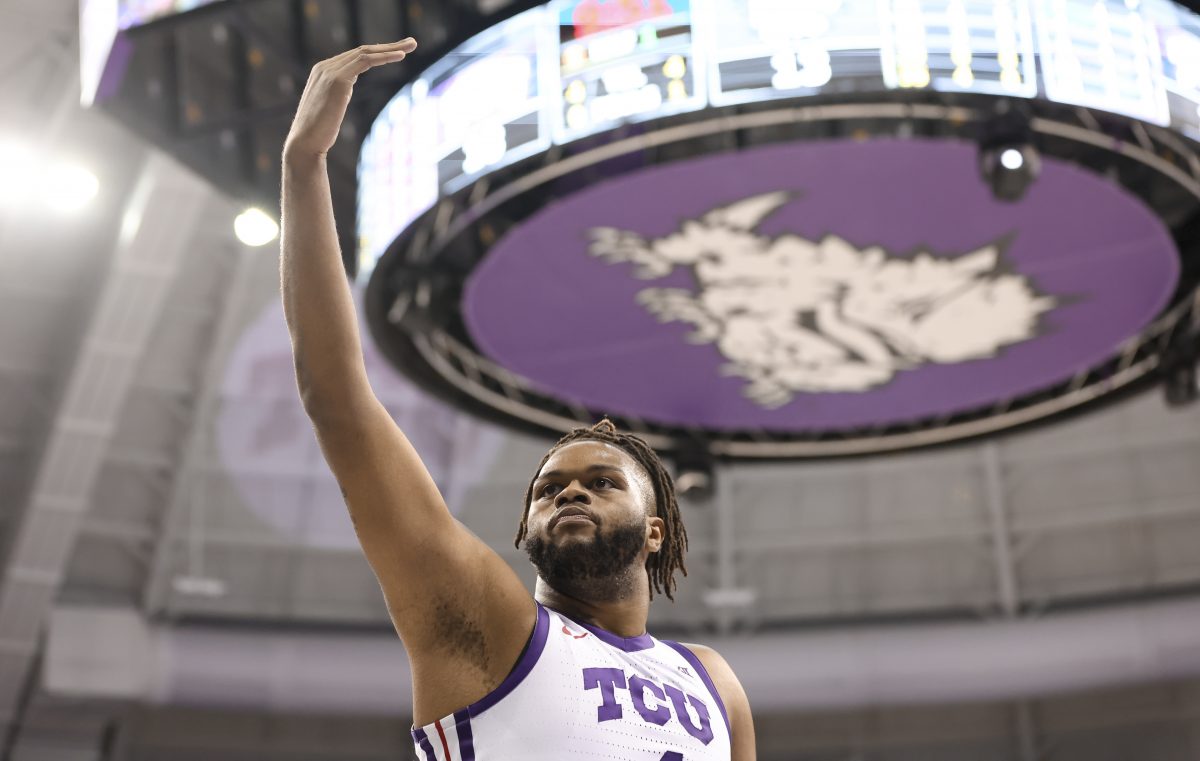 FORT WORTH, Texas — The No. 17 TCU Horned Frogs beat the No. 11 Kansas State Wildcats, 82-68, at Schollmaier Arena in Fort Worth, Texas, on Saturday afternoon. Here are three thoughts on this Big 12 Conference game.

Kansas State (15-2, 4-1 in Big 12) suffered its first Big 12 loss under first-year head coach Jerome Tang and guard Markquis Nowell failed to hit double figures in scoring until late in the game. Kansas State was down as much as 25 points in the second half.

TCU (14-3, 3-2) bounced back from its loss to Texas, a game in which the Horned Frogs blew an 18-point lead. On Saturday four different Horned Frogs hit double figures.

From the start, TCU dictated the pace with … defense. Surprised? Well, TCU is a Top 25 team in KenPom defensive efficiency and created 23 turnovers against Texas Tech in its Big 12 opener. TCU paid extra attention to the passing lanes and wreaked havoc on the offensive end. Kansas State had 12 turnovers by halftime and TCU turned those into 16 points and a double-digit lead.

Then, in the second half, TCU just kept pouring it on. It didn’t seem to matter that the Horned Frogs had a dismal shooting percentage from the arc (3-for-19) and TCU had as many rebounds as Kansas State (39). By game’s end the Wildcats had 20 turnovers and that was just too much for them to overcome.

TCU center Eddie Lampkin Jr. had a great first half and finished with 17 points and six rebounds. Emanuel Miller led with 23 points, including a pair of 3-pointers and Damion Baugh had 11 points. Mike Miles eventually finished with his first career double-double — 13 points and 11 assists.

Aside from the turnovers, the Wildcats shot poorly for most of the game (they did finish at 43.1 percent) and from the 3-point line (6-for-21). Perhaps most importantly, TCU had a defensive answer for Nowell, who spent the first four games of Big 12 play haunting defenses. He finished with 14 points, but he only made one of his first six shots and was only able to come on late as Kansas State tried to mount a furious comeback.

As it relates to Nowell, Baugh was the biggest reason for Nowell’s sluggish day. He drew Nowell at the top of the key and defended him well. This wasn’t Oklahoma face-guarding Kansas’ Gradey Dick on Tuesday night. But Baugh stayed with Nowell until he gave up the ball and then slipped into a help-side defensive posture, doing a good job keeping Nowell and the ball in his sights.

He and Miles also communicated well when it was time to switch. At times, it was clear that the defense was designed for Baugh to take Nowell on one side of the floor and for Miles to take Nowell on the other. The Horned Frogs weren’t going to let Nowell beat them. And he didn’t. Not even late when he finally got on track.

Keyontae Johnson had 18 points and Tykei Greene had 11 points. This loss was a combination of TCU playing exceptional defense and Kansas State not able to get its offense going until the game was too far out of reach.

Now What for K-State?

Kansas State has been the best story coming out of the gate in Big 12 play. The Wildcats started the league slate 4-0, beat three Top 25 teams, Nowell was doing things that no player had done in decades and the Octagon of Doom (Bramlage Coliseum) was rocking during its last home game. The security staff was even practicing for Tuesday’s game with Kansas, in terms of post-game security (which I should point out every arena staff does).

So, was Kansas State looking ahead? With the result of a game like this, it kind of felt like it.

Look, no Big 12 team is getting out of league play without at least one loss. And games between Top 25 team are basically 50-50 games these days. So Kansas State was bound to face some adversity at some point.

So, here it is. Coming off a Top 25 loss to TCU and headed into another Top 25 game with Kansas, its arch-rival, at home, where the crowd is sure to be a sellout.

How will Kansas State respond? I can’t wait to find out.