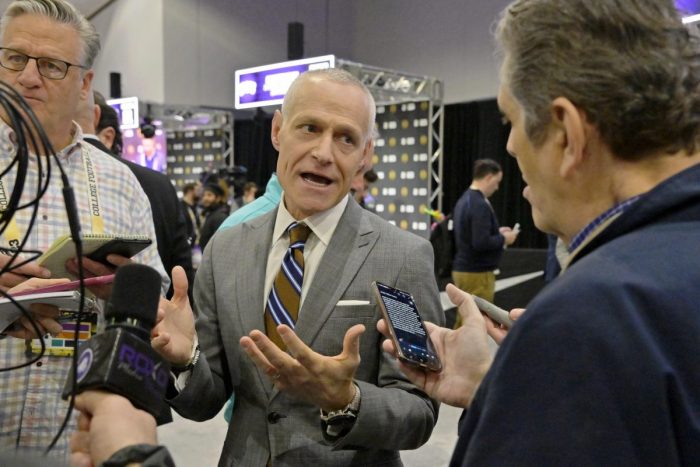 Where is My Big 12 Schedule?

The Houston Chronicle’s Joseph Duarte — who covers the incoming Big 12 member Houston Cougars — tweeted on Friday that what we all want is coming soon. Exact date and everything.

Duarte went on to tip his hat to @chcknights95 on Twitter, who has 51 followers, tweeting that whoever that is got the UCF athletic director Terry Mohajir to bite and give a date.

That all seemed absurd until I figured out that, well, this guy with 51 followers actually DID get Mohajir to give a date, which I found in a thread announcing a new NIL collective for the Knights.

All that for a $12 donation to the Knights’ NIL fund. If I knew it was that easy, I would have donated $50 a month ago to get the whole thing.

Shortly after, Mohajir had to back-track because, well, he basically just got ahead of the whole conference on that one.

And then CBSSports.com’s Shehan Jeyarajah smothered the whole thing with a cold, wet blanket.

For the record, Mohajir said later he had received “new information.”

Never before has the release of a football schedule caused so much fuss. Big 12 Commissioner Brett Yormark told us at the Big 12 Championship Game that the schedule would be out in mid-December. Now, it’s coming out “real soon.”

We now know the Big 12 is working with Oklahoma and Texas on a potential 2024 exit. That means that the league’s goal — which was for every team to play each other at least once between 2023 and 2024 — wouldn’t be feasible.

From my standpoint, who cares if everyone doesn’t get to play Oklahoma and Texas the next two years? Wouldn’t you rather have the buyout money than a one-shot revenue generator at your home stadium? Plus that migraine goes away.

This all makes me feel like there’s MORE going on than just trying to satisfy everyone if Texas and OU leave a year early. And I’ve felt that way for a while now.

We cover a lot of sports here at Heartland College Sports. Unfortunately, we don’t have the manpower to cover all of them.

But I would be remiss if I didn’t point out that the Big 12 had five players selected in the National Women’s Soccer League draft earlier this week, the most the conference has ever had selected.

I follow the conference on Twitter for obvious reasons (I don’t want to miss news). I can say the conference has stepped up its game in recent months to ensure that the Olympic sports are getting their due.

The Most Confident 0-5 Man in America

Bob Huggins and the West Virginia Mountaineers lost to the Oklahoma Sooners on Saturday, 77-76, dropping the Mountaineers to 0-5 in league play.

I was able to watch some of the game once I got to the Kansas State-TCU game. Again, the Mountaineers had every chance to win. Free-throw shooting was the likely culprit. But it’s the latest in a string of close losses for the Mountaineers.

Throw out the Kansas game — which WVU lost, 76-62 — and the Mountaineers have lost their other four Big 12 games by two possessions or less.

Maybe that’s why Huggins hit an optimistic tone on post-game radio, as relayed by Ethan Bock of WV Sports Now.

Earlier this week, WVU parted ways with Huggins’ associate head coach, Larry Harrison, on Thursday. Former and current players were taken aback by the move on Twitter because Harrison has been one of Huggins’ right-hand men for a long time.

Huggins did have more to say beyond the statement the university provided on Thursday, which came on his Thursday radio show.

Actually that was it. That was the rest of it.

Harrison hasn’t said anything publicly, but at some point he will.

Meanwhile, the Mountaineers reacted on Saturday with another near-miss. Huggs has confidence. I feel like their time is coming. Just my gut talking. But definitely Huggins’ gut talking.

Yep, I’m looking forward to the new Big 12 television contract. Hopefully, with Fox as a new partner for basketball, games like Saturday’s Top 25 matchup between Kansas and Iowa State won’t be consigned to a streaming platform (By the way, here are my thoughts on the game, which was one of the best of the day).

I don’t know what to do about Big 12 Now, honestly. I have a subscription because I need it for work (and frankly, if you don’t have one, I’ll point out that it’s dirt cheap and you get everything ESPN has to offer). The production value and announcing are basically the same as you get on the mother ship networks. I’m not sure a Big 12 Network makes sense in this age.

I guess I just want some more flexible scheduling right now. Fans shouldn’t have to hunt for a Top 25 matchup. Maybe, a couple of years down the road, that game ends up on Fox.

Instead, ESPN broadcast a game between Alabama and LSU in that slot and the Crimson Tide won, 106-66. I mean, just flip the games, right?

During the Oklahoma State-Baylor game on Saturday, the power went out. One of those weird things that rarely happens. The game eventually restarted and was completed, but ESPN had to get a little creative with its play-by-play, courtesy of Matt Mosley, who hosts a radio show for ESPN Central Texas, among other things.

Speaking as someone who has actually done that before, it’s not an easy feat. Kudos to Mark Neely, Chris Spatola and the crew at ESPN for keeping the show moving … on an iPhone.

Fardaws Aimaq Makes Texas Tech Debut vs. Texas
TCU Fans React to News Kendal Briles May End Up in Fort Worth
To Top