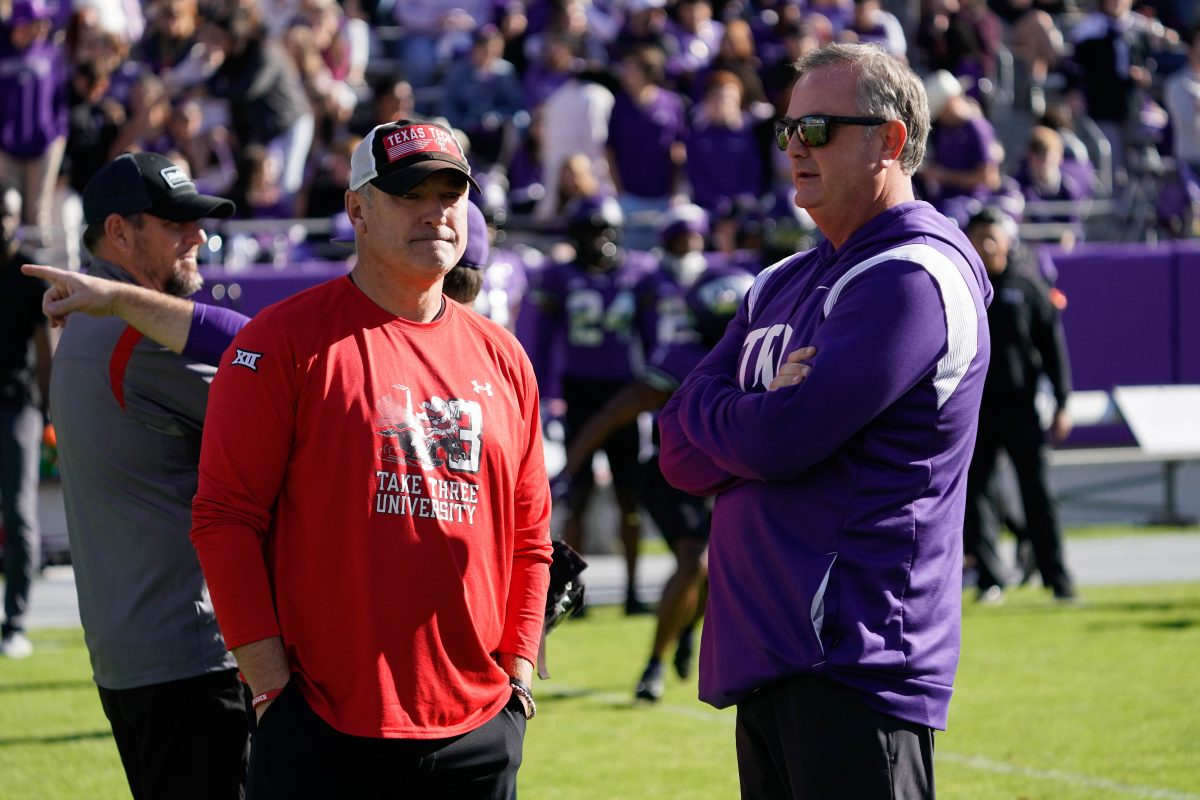 While everyone including is throwing out their way-too-early top 25 rankings, I thought I would do something a little bit different. I am generally not a fan of doing predictions in January due to the fact that so much can change in a matter of a day or two, but it wouldn’t hurt to share a few thoughts looking ahead to next season.

Here I will tell you what current teams I am buying, holding, and selling in the Big 12 for 2023.

In just one year, Joey McGuire has made some significant strides in Lubbock. This past season, they finished fourth in the conference which was their highest finish in over ten years. The Red Raiders also capped off their nice season with a big win over Ole Miss in the Texas Bowl. Quarterback Tyler Shough announced he will be coming back as well. I expect the offense to be better in all areas and the addition of Drae McCray at wide receiver was huge. Plus, the defense will be even more experienced next season.

Some may sell Kansas State, but I am still going to buy in for now. The bad news is that running back Deuce Vaughn is gone and so is defensive end Felix Anudike-Uzomah. Plus, the Wildcats will lose most of their secondary as well. However, the good news is that Will Howard returns at quarterback and there is a chance that all five of his starting offensive linemen will be back too. Don’t sell this team just yet.

While Steve Sarkisian didn’t deliver a Big 12 title to Austin, he still made some progress in year two as the head coach. The Longhorns have a lot of talent returning on offense and some key pieces on defense. However, I am curious to see what this team looks like without star running back Bijan Robinson. The good news is that Quinn Ewers will be back fully healthy and Arch Manning comes in as well. For once, I am ready to buy the Texas Longhorns.

Somebody pinch me, please. Me buying into Kansas football? Yes! Star quarterback Jalon Daniels returns alongside running back Devin Neal who has become one of the most underrated Big 12 backs. That alone should make anyone excited for Kansas football next season and I believe they will continue their trend upward in year three under Lance Leipold.

This may shock a lot of people, but I really love what Brent Venables has done in the transfer portal this offseason. They have added some solid talent on a defense that needed an upgrade including two five-star signees as well. Plus, Dillon Gabriel will be back. I still have concerns about the offense around Gabriel, but I am not ready to give up on Brent Venables just yet. I expect an improvement from last season.

Some people may not like this considering the fact that TCU just played in the national championship game last week. However, they are losing a ton of key players that got them there. Max Duggan and most likely Quentin Johnston are gone and so are several other starters on defense. I know TCU had a magical run last season, but I don’t see that happening again in 2023. For now, I am not ready to buy or sell just yet.

Despite the poor record, the Cyclones were in plenty of close games a year ago. They had one of, if not the best defense in the Big 12 but unfortunately their offense was terrible. Matt Campbell has made changes to the offensive staff which should provide a spark and I am not ready to give up on Hunter Dekkers just yet at quarterback. Speaking of quarterback, keep an eye on true freshman J.J. Kohl the four-star signee from the state of Iowa. While I don’t think this team will win a Big 12 title, they have a lot of returning starters coming back despite losing some big names. Don’t be shocked to see this team win some of those close games from last year and get back to a bowl game.

Last season, I thought Baylor could compete for a Big 12 title and I was way off on that as they finished with a 6-7 record after their bowl loss to Air Force. Blake Shapen returns at quarterback and the Bears also added Mississippi State transfer Sawyer Robertson who hasn’t taken a meaningful snap yet. On top of the uncertainty at quarterback, they will need to restock both of their offensive and defensive lines. I also have questions at receiver where they really struggled last season as well.

With the state of this program right now, I feel like I can’t hit the sell button fast enough. What in the world is going on in Stillwater right now? While the Cowboys have been able to add some guys from the portal, the mass exodus scares me. It’s not like this team lost backups to the portal; they were losing starters who were expected to make big jumps next season. Also, defensive coordinator Derek Mason is gone after just one year there. I think the addition of Alan Bowman at quarterback is interesting, but they have so many holes in so many areas I don’t even know where to begin with this team.

Let me be clear here, the only reason Neal Brown didn’t get fired after last season was that West Virginia owes him too much money. While his buyout is still way too high, I don’t think he will be given another chance if the 2023 season doesn’t go well. This team has question marks everywhere and I do believe this is the end of the road for the Neal Brown era in Morgantown. It’s time for West Virginia to move on because this team will not be competing for a Big 12 title next season.