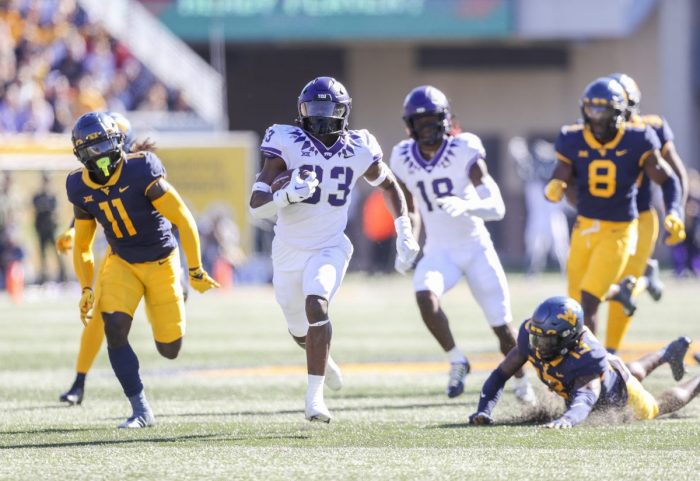 TCU star running back Kendre Miller announced on Monday that he will forego his remaining eligibility and declare for the 2023 NFL Draft after an outstanding 2022 season.

As the Horned Frogs’ leading rusher, Miller piled up 1,399 yards and 17 touchdowns on the ground, averaging 6.2 yards per carry. After suffering a knee injury against Michigan in the College Football Playoff semifinals, Miller was forced to miss the remainder of the game and the National Championship game against Georgia.

Miller made his announcement on Instagram Monday afternoon with the caption, “Frog nation forever💜🤞🏾 Thank you!”

With Miller’s announcement, TCU has now lost both of its top rushers from 2022, as Emari Demercado is out of eligibility and cannot return next season. Demercado had 121 carries for 681 yards and six scores, and had a massive day against Michigan with Miller out (17 car, 150 yards, 1 TD).

Emani Bailey is set to return for TCU, but only had 31 carries in 2022, although he did average 8.1 yards per carry and had two scores on the year.

TCU also has an incoming transfer in Trey Sanders who they hope will live up to his five-star billing as a recruit and take the lead role in the Horned Frogs’ backfield next season.