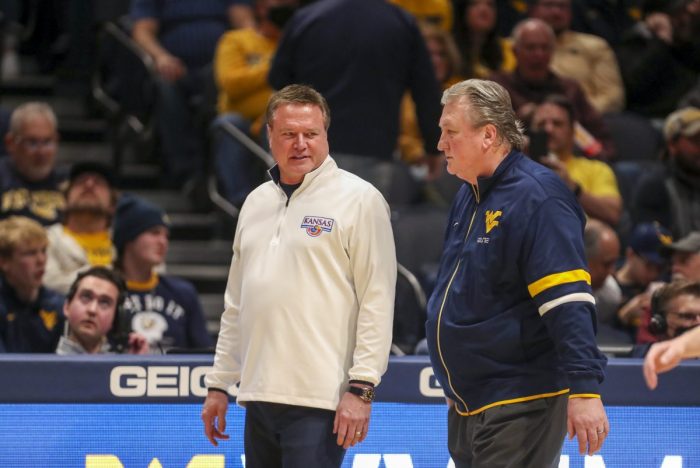 For the first time in two months, there are fewer than nine Big 12 men’s basketball teams in the latest ESPN Bracketology for the Men’s NCAA Tournament next March.

Who left the chat, so to speak? Who’s moving up and who’s moving down? Let’s dig into this week’s update.

Oklahoma State and West Virginia were the two Big 12 teams that dropped out of Bracketology this week. OSU dropped out after its first loss of last week, while the Mountaineers dropped out over the weekend.

The Cowboys have now lost three straight since their win over West Virginia. But, the fact that the Cowboys are precipitously close to being a .500 team doesn’t help their case. They’re an elite defensive team that, at the moment, is offensively challenged.

West Virginia has lost five straight. But because the Mountaineers started Big 12 play as a No. 4 seed, it took WVU longer to drop out. Even with the steep drop, the Mountaineers are one of the First Four Out. So, the reality is that because WVU has a high NET rating, that keeps it in the hunt. A win or two is all the Mountaineers need to slip back in right now.

Pretty soon, we’ll get our first Top 16 seeds from the NCAA Tournament selection committee, which is a good benchmark for where their heads are at when it comes to the 68-team field.

This week, five Big 12 teams are in the Top 16 in Bracketology. Yes, FIVE.

Kansas remains a No. 1 seed, while Texas is a No. 2 seed, Iowa State is a No. 3 seed, and both Kansas State and TCU are No. 4 seeds. TCU’s win over Kansas State on Saturday helped the Horned Frogs leap into the Top 16. But, interestingly, it didn’t hurt Kansas State, which remained a No. 4 seed.

When we talk about the Big 12 being the best basketball conference in the country, it’s no joke. This week’s Bracketology is the proof.

Oklahoma has been on the bubble for quite some time and, for the most part, the Sooners have been on the right side of it. They’re doing just enough to remain in the hunt for an NCAA Tournament berth.

Wins over Texas Tech and West Virginia in the past three games have helped keep the Sooners there. And they’re not that far away from making more noise. The Sooners have four losses to ranked teams this season. The worst was the one to Arkansas, which was an 88-78 loss. The Hogs have since fallen out of the Top 10.

The next four games could decide where the Sooners are headed. It’s Bedlam against Oklahoma State on Wednesday, followed by three ranked opponents — Baylor at home on Saturday, a road trip to TCU and then a home game against Alabama the following Saturday.

Win a couple of those ranked games and the Sooners might say bye-bye to the bubble.

The seven Big 12 teams in the current projected field are:

Texas, No. 2 seed in the East Region (New York) vs. Samford in Denver, Colo. (moved up from No. 3 last Tuesday)

Iowa State, No. 3 seed in the West Region (Las Vegas) vs. UC Riverside in Des Moines, Iowa (moved up from a No. 4 seed last Tuesday)

Kansas State, No. 4 seed in the South Region (Louisville) vs. Princeton in Albany, N.Y. (was No. 4 seed last Tuesday)

TCU, No. 4 seed in the West Region (Las Vegas) vs. Southern Illinois in Birmingham, Ala. (moved up from No. 6 seed last Tuesday)

Oklahoma, No. 12 seed in the Midwest Region (Kansas City) vs. New Mexico in a First Four Game in Dayton, Ohio (was No. 11 seed last Tuesday)