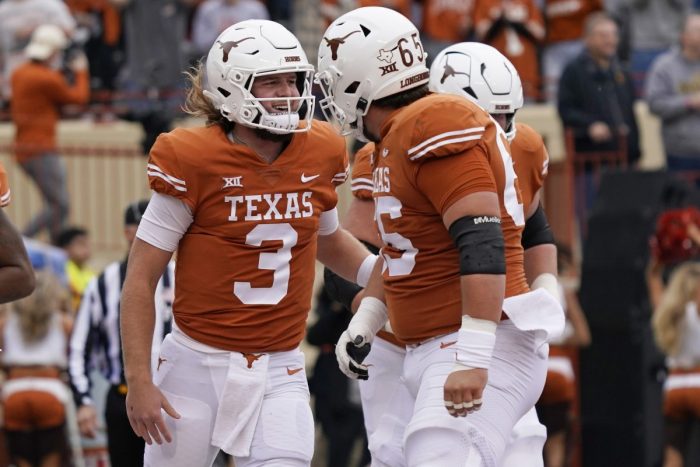 The 2022 college football season just ended, but there’s really no such thing as the offseason anymore with the transfer portal and signing day carrying us into spring football and even into the summer.

That means that football stays on our minds almost year-round at this point, which is why we see so many way-too-early lists come out before spring, post-spring lists come out a few months later, and preseason lists as we roll into summer.

Right now, we are in the way-too-early phase of the “offseason” and today we get to see the Way-Too-Early Heisman Trophy Odds at BetOnline.

North Carolina quarterback Drake Maye (5/1) just edges out incumbent Heisman winner Caleb Williams (6/1) as the favorite to hoist the trophy next season, with Florida State quarterback Jordan Travis just behind them at 10/1 odds.

We don’t see the first Big 12 player on the list until Quinn Ewers at 25/1 odds, and a few spots behind him at 40/1 is Dillon Gabriel, as well as former Oklahoma and now South Carolina quarterback, Spencer Rattler.

Arch Manning, the incoming freshman phemon for Texas, is listed at 75/1 odds to win the Heisman and Texas Tech quarterback Tyler Shough comes in at 100/1 odds to take home the trophy. Much like it was in 2022, the Big 12 looks to be wide-open again in 2023 with a lot of turnover and uncertainty around the league. Buckle up Big 12 fans, we’ve got a while before we find anything out for certain.