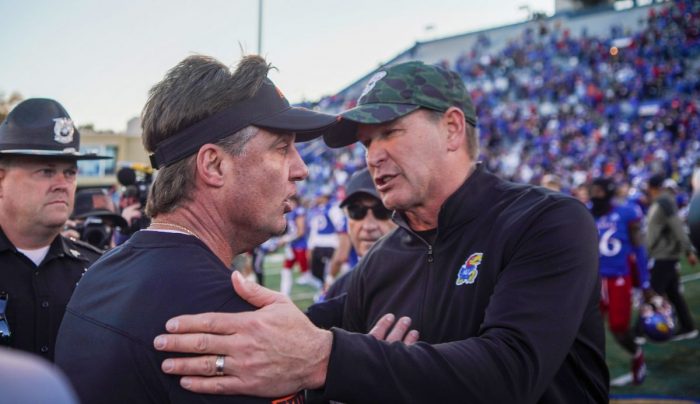 The first window of the 2022-23 transfer portal cycle came to a close on Wednesday, January 18, leaving many teams in better, or worse, positions roster-wise heading into winter workouts and spring football.

Teams across the Big 12 were affected in one way or another by the transfer portal and their teams in 2023 might look vastly different than they would’ve had the portal not been a thing.

Here are the winners and losers of the transfer portal from the Big 12 Conference as we look toward winter workouts.

The Horned Frogs are coming off a run to a national title appearance and will lose some key contributors from an overachieving team full of playmakers. However, Sonny Dykes and company made sure that TCU wasn’t going away after one magical season, and they used the transfer portal to do so. Adding five SEC transfers is a good place to start, and five-star RB Trey Sanders and OT Tommy Brockermeyer from Alabama are leading the way. Four-star WR JoJo Earle is also heading to Fort Worth from Tuscaloosa, as well as WR Jack Bech (LSU) and CB Avery Helm (Florida).

TCU hasn’t lost any major pieces in the portal either and has to replace what it lost to the draft, but as far as the transfer portal goes, TCU might be the biggest winner in the Big 12.

Oklahoma had issues along the defensive line 2022 and needed to add some pass-catchers for Dillon Gabriel after losing Marvin Mims and Brayden Willis to the NFL Draft. So, Brent Venables went out and added two of the top edge rushers in the portal with four-stars Dasan McCullough and Rondell Bothroyd, as well as Trace Ford. The interior of the defensive line was also bolstered with four-star Jacob Lacey and Davon Sears coming in to help anchor an improved front seven. The Sooners also brought back tight end Austin Stogner and added talented wideout Andrel Anthony from Michigan.

Although the Sooners lost 16 players to the portal, only one was a significant contributor in linebacker David Ugwoegbu. Considering what they gained in talent, and the roster overturn that likely needed to happen after Venables’ first year, Oklahoma is a big winner.

The losses of Steven McBride and Ky Thomas do sting a bit, but Kansas’ problem in 2022 was not the offense. With Jalon Daniels and Devin Neal returning in 2023, the Jayhawks’ offense will be fine, but it appears the defense could be on the rise as well. Lance Leipold attacked the portal to find defenders and came out with some major pieces. Four-star EDGE Patrick Joyner and four-star CB Damarius McGhee out of LSU joined the cause recently, as did DL Devin Phillips and Gage Keys. Of the 11 incoming transfers, six are on the defensive side of the ball.

To help Daniels and Neal out in 2023, KU also went out and got three offensive tackles, highlighted by five-star OT Logan Brown out of Wisconsin. Kansas’ overall roster is in a better spot than it was in 2022, and that is thanks to the transfer portal.

Woof. It has been a rough couple of weeks in Stillwater as the Cowboys have seen several key players hit the transfer portal, most notably quarterback Spencer Sanders. Sanders wasn’t the only starter to walk out of Stillwater though, as LB Mason Cobb, S Thomas Harper, DE Trace Ford, RB Dominic Richardson, WR Bryson Green, WR John Paul Richardson, and CB Jabbar Muhammad all did as well.

The Cowboys have made some major additions through the portal with guys like Justin Wright, Anthony Goodlow, and former Texas Tech QB Alan Bowman helping offset the losses a bit, but overcoming the experience and production that Oklahoma State lost in this cycle might make 2023 a season to forget in Stillwater.

Former Cincinnati head coach Luke Fickell left for the Wisconsin job after the 2022 season and with him went four contributors for the Bearcats. Unfortunately, 16 players in total, including six former four-star recruits left. The part that stinks for Cinci is that 10 of the 11 players that have committed elsewhere are at Power Five programs. That means Cincinnati not only lost a lot of players, but they lost talent that they absolutely needed coming into the Big 12 next season.

The Bearcats have added 14 players to help offset the losses, eighth of which are coming from P5 schools including QB Emory Jones, but depth could be a major issue for Cincinnati in Scott Satterfield’s first year.

Look, I like where the Texas Longhorns’ roster is headed, but losing 16 player and getting three in return is not a textbook way to attack the transfer portal. The Longhorns 12 four-star recruits this cycle, and got back two four-stars in S Jalen Catalon and CB Gavin Holmes.

Four transfers are offensive linemen, a position where depth is vital to success, and Texas had some pieces there that they need to improve in 2023. Texas’ roster is just fine, don’t get it twisted. However, losing that many pieces and only making three additions just doesn’t feel like the best approach when trying to build on an 8-5 season.

TCU to Celebrate Fiesta Bowl Win During Oklahoma Basketball Game
J.D. PicKell on Oklahoma: ‘Year Two Could Be a Big One’
To Top