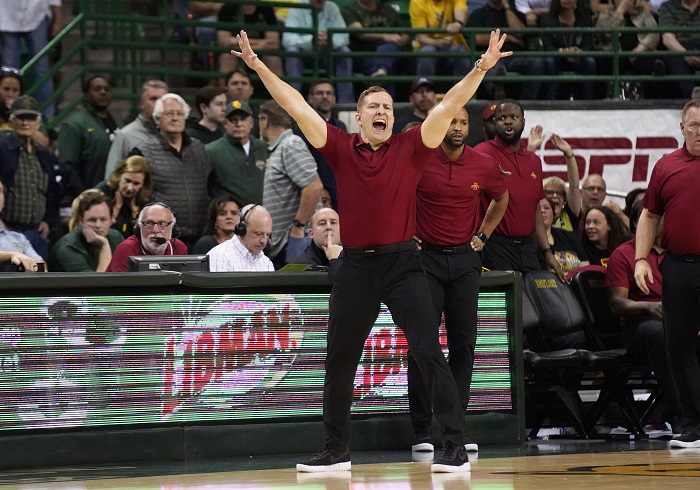 Iowa State men’s basketball received its third commitment for 2024 with four-star wing Dwayne Pierce committing to the Cyclones on Sunday.

He was also considering Memphis, Florida State, George Washington, Georgia Tech and Illinois, among others.

Before Pierce’s commitment, the Cyclones already had the No. 4 overall 2024 Class per 247Sports.com.

Earlier this year, four-star center JT Rock committed to join the Cyclones. Rock is a 7-foot-center from Lincoln High School in Sioux Falls, S.D. His is the No. 1 recruit from South Dakota and 247Sports.com currently ranks him at No. 138 overall.

In December, the Cyclones picked up a commitment from Nojus Indrusaitis, a four-star shooting guard who plays at St. Rita’s in Lemont, Ill., outside of Chicago.

At the time of his commitment, Indrusaitis, 6-foot-5, was the nation’s No. 81 recruit, per 247Sports, and No. 77 in the site’s national composite rankings. He is now No. 76. He had offers from DePaul, Illinois, Iowa and Marquette, among others.

Cyclones head coach T.J. Otzelberger and his staff have picked up significant steam in recruiting in the last year. They put together one of the best recruiting classes in Iowa State history last month.

The other members of the signing class were Milan Momcilovic a 6-foot-8 forward from Pewaukee, Wis.; Jelani Hamilton, a 6-foot-6 guard from Cumberland Christian Academy in Austell, Ga.; and Kayden Fish, a 6-foot-6 forward from Staley High in Kansas City, Mo. Momcilovic is a Top 40 national recruit.