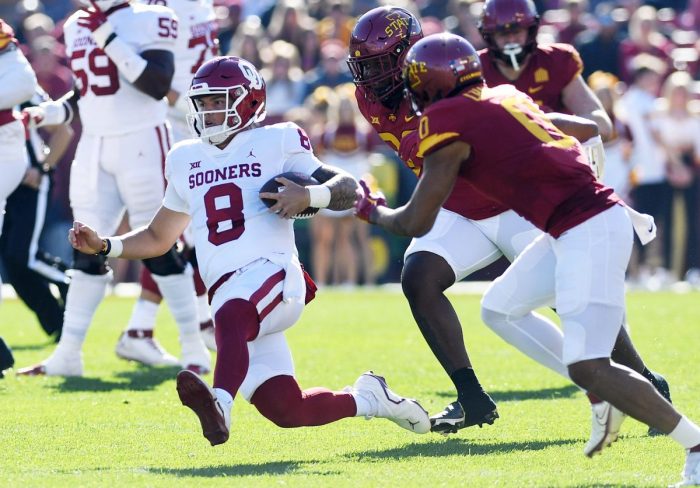 It’s never too early to talk about the 2023 college football season. Even though we are in full swing with basketball, there are still plenty of talking points going into the next football season.

While all the focus is on the NFL Draft with the Senior Bowl coming up, I decided to take a look at the top returning Big 12 players on offense according to grades from Pro Football Focus.

Here are the top returning offensive players at each position.

This was a surprise to me as Dillon Gabriel was named the best returning Big 12 quarterback according to Pro Football Focus. He threw for 25 touchdowns last season and had just six interceptions. While Gabriel certainly had some questionable moments in 2022, Oklahoma would have been hopeless on offense without him as we saw in the Texas game. The good news is that he will have another year in Norman which should help him and hopefully the Sooners can get some more weapons around him.

It didn’t take long for Richard Reese to make his presence felt in Waco last season. He had his breakout game just three weeks into the season against Texas State where he ran wild for 156 yards and three touchdowns. Reese would go on to have two more games where he went for over 140 yards and ended up finishing the year with 972 yards and 14 touchdowns. That is pretty impressive for a true freshman and I can’t wait to see what he can do in 2023.

We have our first player from one of the four new schools make the list. For those who aren’t familiar with Epps, he will be entering his fourth season at BYU. He missed a lot of time during his first two years in Provo dealing with injuries and he even missed the last five games of last season due to an injury. Despite his struggle to stay healthy, Pro Football Focus absolutely loves him as they have him ranked as one of the 20 best receivers from this past year. In a shortened season, Kody caught 39 passes for 459 yards and six touchdowns. Hopefully, we can see him fully healthy in 2023.

You aren’t going to find many linemen in the conference with the experience that Zach Fraizer has. He has started in 34 games during his time in Morgantown and looks to be the leader of that West Virginia offensive line in 2023. Zach is on several early preseason team watchlists and had an overall grade of 80.8 last season according to Pro Football Focus.

Make no mistake, this man is the best offensive lineman in the Big 12. He won the Big 12 Offensive Lineman of the Year award last season and was a first-team All-Big 12 selection as well. Look for him to be on several preseason All-American lists in 2023 and he should be a shoe-in for the Big 12 Offensive Lineman of the Year award once again next season. Many thought that Cooper would enter the draft after a stellar junior season but he decided to play another year of football at Kansas State.

Due to some other transfers, Brandon Coleman is the best returning tackle according to Pro Football Focus. Coleman started eight games in 2021 before becoming the permanent starter last season where PFF graded him at a 79.7. While TCU will lose Steve Avila up front, it’s nice to have a guy like Brandon Coleman back in the lineup next season.