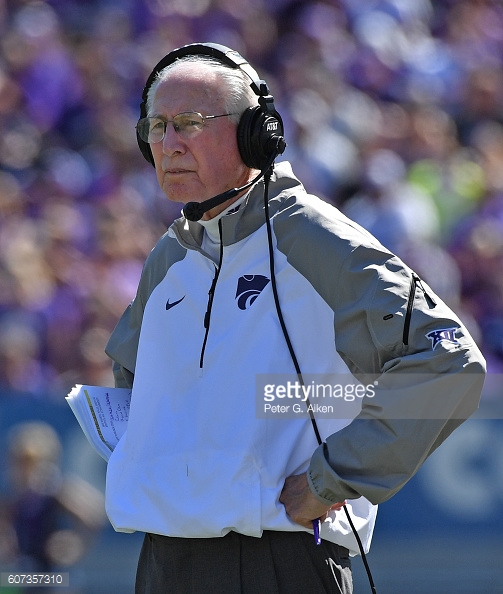 What was Kansas State coach Bill Snyder so upset about following his team’s 63-7 thrashing of FAU? Penalties.

Yes, he he was pleased with the final score, but he was ticked off by 13 penalties for 131 yards.

In the post game, Snyder said, “We totally lacked discipline to play this game. Seven of (the penalties were) on wide receivers, the rest of them holding calls. That is why I am angry right now. It’s nothing more than discipline. If you don’t have discipline you may get a game or two like this, but when you line up and play in our conference without discipline you are going to be hanging your head.”

Good for him. Snyder wasn’t just satisfied by looking up at the scoreboard and see 63-7. He was fired up, knowing that if his team plays this undisciplined in Big 12 play, they will finish in the bottom third of the league. Snyder’s best teams were not always the most talented, but the most disciplined, hardest working, and most cohesive.

Most of the damage done by KSU was on the ground, rushing for over 300 yards on 54 carries for 6.2 YPC. QB Jesse Ertz looked more comfortable (as he should against FAU vs. Stanford), rushing for 40 yards on 9 carries with a score, while completing 8/13 for 117 yards and 1 TD.

I would’ve liked to have seen Ertz throw the ball more to build more confidence with the passing the game, especially with the schedule getting tougher in a couple weeks. But, with that being said, there’s no reason to screw up a good thing, which was the ground and pound attack.