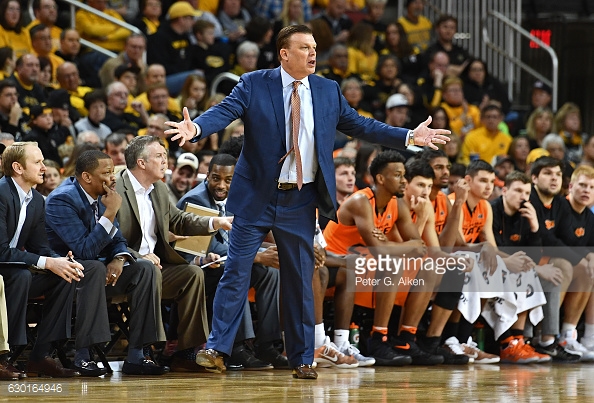 Had someone come up to me today and said Oklahoma State needs a new basketball coach again and the choices for the reason why were a) Brad Underwood left for Illinois, or b) Phil Forte stabbed Brad Underwood to death with a fork I’d have really had to think about my answer because they both seem so ludicrous to me!

But one of those things happened!  And Forte isn’t on the lam from the Stillwater police.

Illinois, man.  Had it been someone that was an obvious step up I’d be okay with it.  Had Mike Krzyzewski retired and Underwood went to Duke I’d completely understand, but I’m not sure Illinois is even a sideways move based on what Oklahoma State is capable of being.

I really want to be furious with Brad Underwood, and I was for a few hours.  But the more I think about it, the more the shock wears off, the more I hear about what went down…..  guess what?  I’m not mad at Underwood at all.  Well maybe a little, but not the “burn his house down before he can move his stuff out of it” mad like I was a few hours ago.  There’s one thing a lot of people are forgetting:

Just in case some of you are kind of skimming along and might have missed that I’ll repeat it:

Holder was a terrific golf coach, but is a mediocre, at best, Athletic Director.  It’s not a secret that he’s terrible to work for.  He has an ego, something a coach has to have to be as successful as he was, but being an AD requires finesse instead of brute force.  Holder thinks he IS the athletic department, when in reality it’s his job just to maintain it.  His biggest asset is his friendship with Boone Pickens, but at what point do his many blunders start to outweigh Mr. Pickens’ wallet?  Working for Holder has to be like working for a company where the owners’ son is your boss.  No matter what he does, his dad will take his side and you’ll be wrong.  Pickens protects his hunting buddy Holder.

Holder almost lost Mike Gundy a few times now; the best football coach Oklahoma State has ever and probably will ever have.  So many of you don’t know how close he was to leaving for Arkansas a few years ago.  He flirted with the black hole that is Baylor this offseason.  How bad do you have to hate your boss to consider leaving your alma mater to go to Baylor right now?   As we speak there’s an unsigned, two-year contract extension for Gundy floating around.  It’s been out there since before that start of last season.  The rumor is that The Mullet won’t sign it because he wants more money, not for him, but for his assistants and Holder won’t budge.  Of the two Mikes in OSU’s athletic department, Gundy is more valuable than Holder.  Give the guy what he wants.

And don’t forget the Travis Ford contract fiasco!  The albatross that was a ten-year deal for way too much money.  The program forced to keep a coach that was a bad fit (maybe just a bad coach) because they couldn’t afford to buy him out, set the basketball program back a decade.  Everything Eddie Sutton built collapsed under the weight of that contract.  Underwood seemed destined to restore it!

And then today happened.

This is a fireable offense for an AD in my opinion.  You have one of the hottest coaches in America and you let him get away 24 hours after the season ends?  It’s inexcusable!  While we will probably never officially know exactly what happened, people in the know have already started talking: Brad Underwood wanted (and deserved) a raise.  Holder low balled him.  Underwood said he wanted the league average and Holder said no.  Underwood called Holder’s bluff.  Turns out Mike was holding a pair of twos and Brad had a full house.  Sign me up for poker night at the Holder house any time!  The coach everyone wants asks you to make him the fifth-highest paid coach in the league and you say no?  Congratulations, you just let your stupid move with Ford’s contract make you gun shy so you let the guy who deserves that kind of a deal walk!

It’s already being rumored that Brad Underwood and Mike Holder didn’t exactly get along, and I’m sure he’d heard all the stories about Gundy’s troubles with him, so maybe as soon as Holder tried to get him cheap he just decided it wasn’t worth it.  If the Golden Boy who sits in the billion dollar football palace next door can’t even get what he wants, how do you think Underwood felt about his chances?

Speaking of full houses, the question now is how do keep ours filled?  I only made it to one basketball game this year, the Bedlam game in Stillwater.  My friend and I had to stand against the wall on the walkway because our tickets were general admission and there were no seats.  The OU Sooners shot lights out that night, but the Cowboys came back from a double-digit deficit late to win.  A sold out Gallagher-Iba Arena is a force and it smothered a young Sooner team playing without its point guard that night.  When she’s full GIA gives Oklahoma State a home court advantage rivaled by only a few other schools.  It was nice to hear the old girl sing again, and Holder needs to find a way to build on this season despite the coaching change or he needs to be gone.

I wrote an article a year ago calling for Holder to hire Doug Gottlieb instead of Underwood.  I thought the key to getting OSU relevant in hoops again was to generate interest and put butts in the seats.  Gottlieb would have created a buzz, both with fans and with recruits, and all he would’ve had to do was win a little to keep hope up.  All we had to do was pray all that basketball knowledge in his head would translate into him being a good coach.

To write this I actually deleted a half finished article proclaiming how I was wrong and Holder was right for not bowing to immense fan pressure to bring in Doug and instead pulling the trigger on Underwood.  And to be honest he did make the right move a year ago (before blowing it today!).

But now I think it’s back to Gottlieb being the choice again.  For all the same reasons I said last year. You can’t whiff on this next hire.  You can’t lose the moment gained during Underwood’s brief tenure.  The fall of Eddie Sutton followed by the fall of Sean Sutton followed by the Travis Ford mistake followed by Brad Underwood’s one and done is not a good look.  No established coach is going to touch the gig, and there’s no sure thing up and coming coach out there this year like there was with Underwood last year.

So snatch up the alum with the encyclopedic of basketball knowledge in his head.  Hire the guy that the recruits know from his broadcasting career.  Bring in the dude that the fans want to keep excitement high!

And do it now!  If I’m Holder the press conference announcing Gottlieb happens Monday.  Get in him in ASAP to give him a shot at keeping Evans around another year, of putting together a good recruiting class, of finding right assistants to help a rookie coach out.

Your job should depend on it.