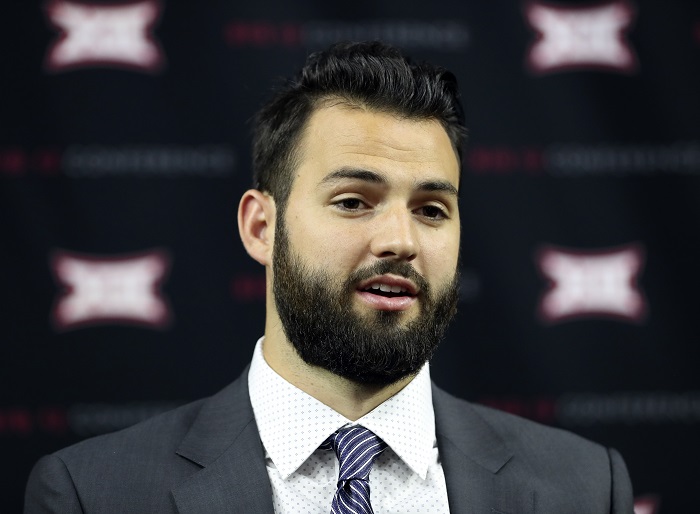 Do you have high expectations for the West Virginia Mountaineers? Head coach Dana Holgorsen has no problem with that.

“Well, we welcome expectations,” Holgorsen said at Big 12 Media Days on Tuesday in Frisco, Texas. “Heck, you want ’em to talk about you. We want you guys to talk about us.”

Well, let’s talk about the Mountaineers, who are picked to finish second in the Big 12 Conference by the media and led by a quarterback who is a Heisman Trophy candidate. And, if you’re not clear about that, then take a look at West Virginia’s 2018 media guide. On the inside cover you’ll find a two-page spread with quarterback Will Grier’s face and a note directing you to Grier’s Heisman web site, Grier7Heisman.com.

Plus, Grier got a haircut. The flowing locks are gone, replaced by a more, shall we say, professional coif. Grier said he was actually getting tired of the look and wanted something shorter.

“I really didn’t like the way that I looked,” Grier said. “I looked ugly to be honest. After a while (the long hair) became a brand thing. I’m glad it’s off now, though.”

The Heisman campaign strategy may seem out of the ordinary for Grier, who had to sit out all of 2016 after transferring from Florida, and missed the Mountaineers’ bowl game with Utah due to a finger injury. But in between Grier put up some of the best numbers in the country, throwing for 3,490 yards, 34 touchdowns and 12 interceptions. Of course, being in the Big 12 he was overshadowed by eventual Heisman winner Baker Mayfield.

But in a conference where Grier is the top holdover passer, and in a country that is somewhat bereft of veteran passers with Grier’s credentials, he has zoomed to the top of many Heisman lists. Additionally, with weapons like wide receivers David Sills V and Gary Jennings Jr. back, he has some of the best offensive tools in the country to work with.

Hence the Heisman campaign. But not before Holgorsen, Grier, Grier’s father and others weighed in on whether to move forward.

“He’s ready for this,” Holgorsen said. “He’s prepared himself his whole life for us and you will see as you talk to him throughout the course of the day. I’ve got no worries about him not understanding expectations and how to deal with expectations.”

Grier got that memo on Tuesday. He talked more about his teammates and his college home in West Virginia than he did about his own expectations or aspirations of winning the award.

The closest any West Virginia player has ever gotten to winning a Heisman was a third-place finish by quarterback Major Harris in 1989.

If Grier stays in the Heisman race into November, then the Mountaineers are likely doing pretty well for themselves in 2018. West Virginia will test itself early with a neutral-site opener against Tennessee in Charlotte, followed by a road trip to ACC contender North Carolina State two weeks later, and the Wolfpack boast their own talented quarterback in Ryan Finley.

Run that opening gauntlet at 3-0 (there is a home opener with Youngstown State in between) and the Mountaineers could ride a manageable start to their Big 12 slate into November at 8-0. Now that’s getting way ahead of ourselves, of course, and that’s what Holgorsen wanted to avoid on Tuesday.

He knows as well as we do that there are expectations this season, and he has to manage them, perhaps for the first time in his tenure in Morgantown.

Lose to Tennessee and all the expectations in the world may not matter.