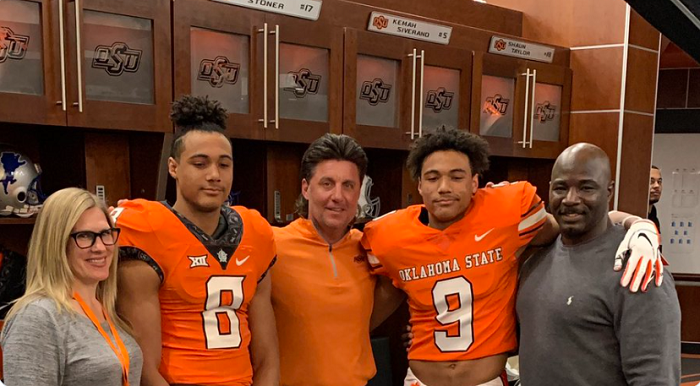 Bryson and Blaine Green grew up in Minnesota and moved down to Texas when their father was relocated for work. Twin brothers, who both play wide receiver, have signed to play for the Oklahoma State football program.

It’s a football family, as they have an older brother, Seth, who also plays for the Minnesota Golden Gophers.

Blaine and Bryson are stars at Allen High School (TX) and are the right combination of business and fun as they prepare for Trinity in the regional round of 6A-1 Texas high school football players.

“Trinity is a great opponent. It will be a good test for us,” Bryson says. He added, “We actually just got back from doing film study with our quarterback, we are focused and want to be on the same page. This is an aggressive team, and we needed to see where we can exploit some of their weaknesses.”

At Allen High School, winning is expected in football. Many big-time players have come through Allen like Arizona Cardinals quarterback Kyler Murray.

And according to the twins, Kyler isn’t too big for his home town. “When he’s back in town we catch for him,” Bryson said. Blaine added, “Yeah we work with his dad Kevin Murray.”

“It has been a weird year, especially earlier in the season. Now, though, they are letting more of people show up [to games], and it gets loud. (Allen plays in a stadium that holds 18k fans). But we are blessed and just feel lucky to have football this year,” Bryson said of the COVID-19 season. Bryson and Blaine are both big targets as both are roughly 6’2” and 205 pounds.

When you turn on the tape, the brothers make big-time, acrobatic catches when covered, even when they do not create a lot of separation.

The NFL wide receivers they like to compare their game to probably will not come as a surprise. “I like to model my game after Davonte Adams I want to be the aggressor, and I want to just take the ball. Blaine and I both have that mentality, but if the balls in their air its ours,” Bryson said.

But for Blaine, he looks to another big time NFL star, saying, “Oh definitely D Hop (Arizona Cardinals WR Deandre Hopkins) he’s just always there to make big plays, and Kyler been throwing him great balls too. If you need a play, you can just throw it up to him, and hell get you one.”

Of the two brothers Bryson is the higher-rated recruit coming in as a four-star according to the 247 composites, but both athletes are rated as four-star prospects according to ESPN recruiting. However when asked who the better brother, Blaine was wasted no time saying, “It’s me, it’s me Blaine.”

“Nah, you know its me”, Bryson responds.“You better write that down I’m the better brother.”

Both are ecstatic to be playing together, while they noted they always figured they would play together, individually they had both decided on Oklahoma State. “When we went up there for a camp; man, it was a home atmosphere, we knew right away.  Then Coach Gundy gave us our first offer, and we formed a great relationship with him and coach Dunn,” Bryson said.

Blaine went on to say, “It was a weird process, but probably easier for us, because we knew where we were going. It would have been cool to take some visits, with our family though. Minnesota was the one of the other schools that pushed hard for us, because our brother [Seth Green] plays up there.“

The brothers push each other and describe each other as “a built-in best friend”. “We are excited and blessed to play together. It is a dream come true and the next one is hopefully to make it to the NFL. We have always pushed each other and will continue to.” Blaine states.

The brothers will both be early enrollees for the Cowboys and be on campus in January. When asked about the changes to NCAA rules which would allow them to potentially make money off their likeness, in unison both responded, “We aren’t worried about that right now at all, we don’t need to make money off football right now. It is a blessing to play college football, and a dream come true.”

Bryson then commented, “It might be cool to make some money, but, we are going to get a free education, and people pay a lot of money to get that.”

When asked about what they need to work on, they both noted the mental game is the biggest part, along with understanding coverages. “Everyone is good, this isn’t going to be high school. Everyone is supposed to be a football player, so being a good athlete isn’t enough, everyone is a good athlete,” says Blaine.

Oklahoma State got themselves a pair of well-rounded young men, who have a good head on their shoulders.  They understand the kind of work and effort it takes to match their talent to be successful at the colligate level.