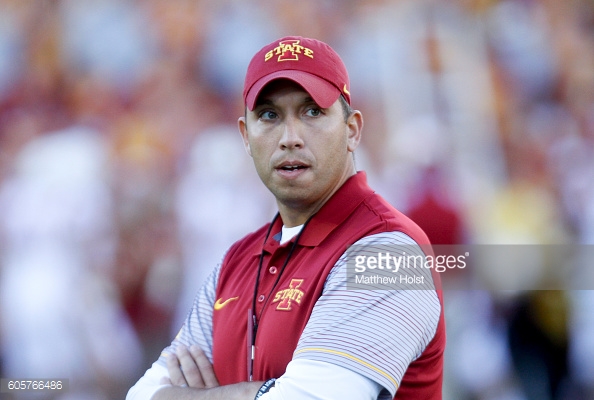 The biggest question burning in Ames, Iowa remains: who is the starting quarterback? Well, according to head coach Matt Campbell, he doesn’t know. During the Big 12 media teleconference on Monday, Campbell said, “I think you’ll see [both QBs] continue to play and that will continue week to week.”

Campbell was not just playing coy with more of a national media presence, because he reiterated that stance later in the day Monday when speaking to his local media outlets.

Campbell hasn’t ruled out using both quarterbacks during same drive. Still figuring out what he has with Lanning and Park. #Cyclones

I ended up watching most of the first half of Iowa State’s game against TCU last Saturday. Lanning was average, but Park was even less impressive. He bailed on his progressions too quickly and was looking to run once his first option appeared to break down.

But, my fear is that this system is putting an uncomfortable amount of pressure on both Lanning and Park, while making it difficult for the rest of the offense to become comfortable with one quarterback.

Example: In the first quarter against TCU, Lanning led the team on an 8-play, 54-yard drive resulting on a touchdown. Lanning came out for the following drive, and it was a 3 & out. That was apparently enough of Lanning, as Park was under center for the next two drives.

Coming out for the second half, Lanning led the offense with an 11-play, 54-yard drive resulting in a field goal. His next drive was a 3 & out, which then led to Park getting the next drive, which only lasted 5 plays.

Right on cue, the ball was back in Lanning’s hands for two drives, one lasted just 4 plays, but the next was a 10-play drive for 67 yards, ending with a touchdown. The final drive was given back to Park, ending in a field goal.

It seems clear that Lanning, as of right now, has a better grasp of the system, and the team scored their only two touchdowns with him at QB. I’d make Lanning the starting QB for the rest of the season. Worst case, make Saturday’s game the final tryout before the Big 12 schedule really gets underway, and whoever ‘wins’ the job on Saturday is the starting QB. Going back and forth, as Campbell continues to do, does not allow the offense, or the team, to have any kind of continuity, especially once the schedule ramps up in Big 12 play.

So, who do you want at QB in Ames?? Lanning or Park? Hit us up in the comments!