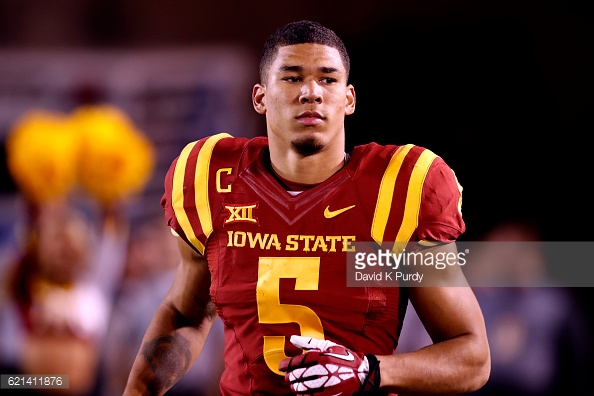 There was always some speculation as to whether or not wide receiver Allen Lazard would bolt to the NFL Draft after this season. Well, as of Monday, those plans are not progressing, as he said on Monday he will be returning for his senior season.

Allen Lazard was asked if he was going to return for his senior season. He said, “Sure,” in the most unenthusiastic way possible.

Lazard is on pace to improve on his 2015 numbers, despite some confusion at quarterback for the Cyclones. Lazard has racked up 658 yards on 48 catches, along with 5 touchdowns. Last season as a sophomore, Lazard caught 56 passes for 808 yards and 6 touchdowns.

At 6’5”, 223 pounds Lazard has NFL scouts salivating over his size, with a 40-yard-dash that is under 4.6, according to NFL Draft Scout. He was a five-star prospect out of Urbandale, Iowa, who decided to stay local.

But, Lazard is best to stay one more year as it would hopefully allow the Iowa State quarterback situation to clear up, making him look even better in his senior season. Also, critics have accused Lazard of taking plays off during this season. That’s going to be a characteristic he wants to have cleaned up and removed by the time he is ready to cash in.

Overall, this is great news for the Cyclones and the fan base. With Lazard back in Ames next season and either Jacob Park or Joel Lanning running the show, and the offensive line a year older, the offense can be special at Iowa State.

Iowa State two-QB system a disservice to Park and Lanning
Big 12 college football picks against the spread: Week 11
To Top