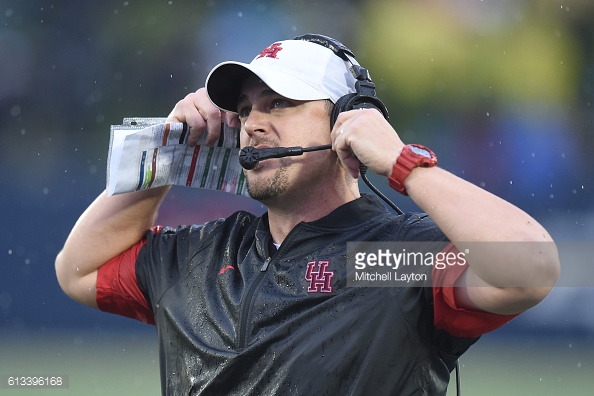 According to a report from ESPN’s Brett McMurphy, Texas’ administration is receiving “extreme pressure” from boosters to dismiss Charlie Strong and hire Herman.

McMurphy says that Strong was considered safe if the team went out and beat Kansas and TCU in their final two games. That would have given the Longhorns a 7-5 record before playing in their bowl game. But, after Houston upset #5 Louisville on Thursday, things apparently changed rapidly.

McMurphy writes: That was because in October the lure of Herman, always considered Texas’ No. 1 target, had dulled with losses to Navy and SMU and near losses to Tulsa and UCF. The SMU loss was extremely troubling to UT’s boosters because it was to a perceived “lesser school” in the state, sources said.

This is how stupid some of these Texas boosters are. Do they think Tom Herman was a better coach than he was a month ago when his team lost to Navy and SMU? I can’t get over what clowns some of the boosters in Austin are. If you want Tom Herman, that’s very understandable. But, to change your opinion from loving him in September after the Oklahoma win, to cooling off after losses against Navy/SMU, and then loving him again after a win against Louisville might be the most assassin and unreasonable thing ever.

There is also reportedly concern that Herman could end up at Texas A&M if the Aggies part ways with Kevin Sumlin. Of course, Herman is also expected a candidate at LSU and Oregon, if the Ducks fire Mark Helfrich.

Bidding for Herman, who is 22-3 over his two seasons at Houston, is expected to “begin” at $5.5 million.

Charlie strong will get about $10 million in buyout money if he’s fired… for the record, I’d give Strong through 2017 because of the strong underclassmen he’s brought in to help turn around the program.

My guess? Boosters run the show and Herman is the head coach in Austin come season’s end.

Courtney Ramey is a part of our Heartland College Sports Big 12 men’s Top 25 returning players countdown as we get closer...

Well it’s a new season of college football and that means a fresh slate for my Big 12 football picks against the...

As the weeks fly by in college football, we learn more about each team. Each week is more important than the next...

After a Slow Start, Iowa State is Forming Into the Team Many Expected

Saturday night the Cyclones did something they haven’t done since 2004: They beat Kansas State in Manhattan. The last time that happened,...

Apologies for the late edition of Big 12 defensive numbers. The league features some damn fine offensive teams and some finer defensive...

Dana Holgorsen on hot mic: ‘Our guys got bigger balls than their guys’
Twitter reacts to Texas losing to Kansas
To Top