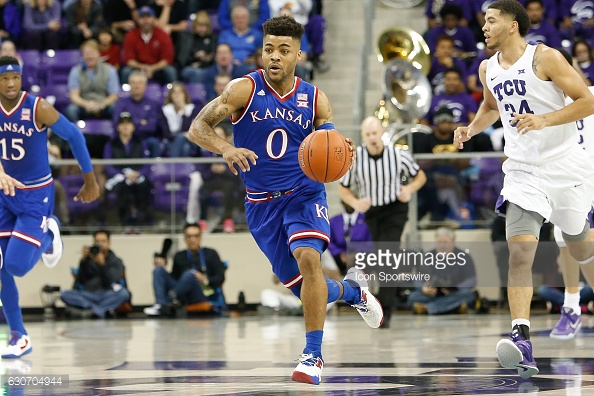 Sitting at 18-1 and 7-0 in conference play, the Jayhawks are about to face the toughest stretch of games on their schedule. Kansas will face West Virginia in Morgantown on Tuesday, then they travel to Lexington to face Kentucky next weekend, and finally they will face Baylor at Allen Fieldhouse on the following Wednesday. The Jayhawks are in a good position to win their 13th consecutive conference title, but this stretch will be a huge test.

While the Jayhawks have a near perfect record and are ranked #1 in the Coaches Poll and #2 in the AP Poll, Kansas has been far from a perfect team this year. After the freshman center, Udoka Azubuike went down with a wrist injury, the Jayhawks have struggled mightily with defending opposing big men and the lack of depth has really hurt the Jayhawks. Landen Lucus has played well in Big 12 games, but Carlton Bragg has had a very disappointing sophomore season.

With the lack of big man depth, coach Self has had to adjust by playing a four-guard lineup this season. Offensively, this lineup has been very successful. Frank Mason has solidified himself as a legitimate National Player of the Year candidate. Devonte’ Graham has been somewhat inconsistent, but he has put together a solid junior campaign, averaging 15 points per game and is 3rd in the Big 12 with 5.4 assists per game. Josh Jackson is the toughest of the one-and-done players that Bill Self has recruited and he will be a top 5 pick in the NBA draft. Sviatoslav Mykhailiuk has averaged 11 PPG and he has been the deep ball threat that the Jayhawks need to spread the floor. However, while Lucus has been a consistent rebounder, he is not a real offensive threat against the league’s best big men and he can get beat by quicker opponents.

A common theme for past NCAA tournament champions is that guard play usually carries championship teams in March. That will have to be the case for the Jayhawks this year. Kansas will go as far as Mason and Graham can carry them. I believe that the performance of KU big men will improve, though. Carlton Bragg was a spark off the bench for the Jayhawks as a freshman last season, and he has the ability to be a major factor for Kansas if he can put things together this season.

The seven-man rotation that the Jayhawks use is not ideal, but it can be effective if all seven players can contribute. Bill Self coached teams usually pride themselves on getting stops and being the best defensive team in the Big 12. That is far from the case right now. The four-guard lineup that Self is using makes Kansas one of the quickest teams in the nation, but it also leaves glaring holes in the KU defense. If coach Self can get the smaller Jayhawks to buy into improving on the defensive end, they will be a much more well rounded team. It is going to be tough to outscore the Jayhawks, as they have such an explosive team with four guards that are capable of hurting teams from beyond the three-point line.

While Kansas is sitting in a great position to win another conference title and acquire a top seed in the NCAA tournament, the team has a lot of areas to improve before March. Bill Self prides his teams on playing defense and out-toughing opponents. At this stage of the season, defense has been a major weakness for KU. The Jayhawks are allowing 70.3 points per game, which ranks 8th in the Big 12.

They often times look lost playing with four guards, which is a new style of play for Bill Self to coach and for the players to understand. The Jayhawks still have time to fix some of their perceived weaknesses before March and with veteran guards and the possible player of the year, the Jayhawks should be in great shape to make a Final Four run this season.