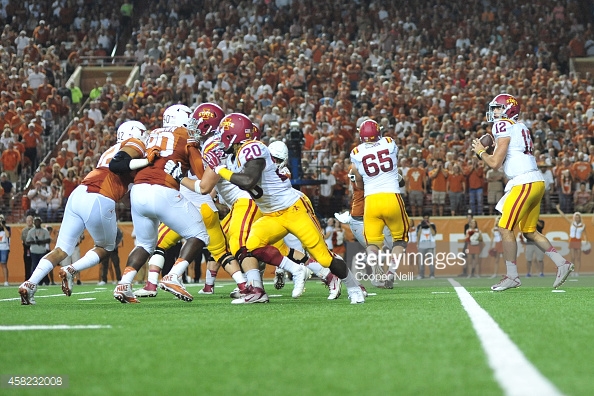 Yes, we’re over 6 months away from starting the 2017 college football season, but why not take a look at which Big 12 teams can take the biggest jump in wins from the 2016 season.

Despite going 5-7 last year and just 3-6 in Big 12 play, Texas is one of the Big 12 teams who could make a big leap in the standings. The program fired head coach Charlie Strong, who just wrapped up three-straight losing seasons, the first time that’s happen for the Longhorns since the 1930s. But, Strong did recruit very strong (pun intended) classes in 2015 and 2016. So all the sophomores and freshman that have received significant playing time the past couple of seasons are now seasoned vets as juniors and sophomores.

Junior linebacker Malik Jefferson is one of the favorites for Big 12 defensive Player of the Year. He’s been playing since he was a true freshman and should be the leader of this Longhorns defensive in 2017. The secondary had its good and bad moments last year, but it was mostly a sophomore bunch that had a learning curve and is hopefully ready to take that next step.

Offensively, D’Onta Foreman is gone at running back, but there is plenty of depth at the position for Tom Herman. Chris Warren returns from injury, so does Kirk Johnson, while Kyle Porter should also find himself in the mix. At quarterback, Shane Buechele had a mostly positive freshman year and the reps he received are invaluable. Some believe freshman Sam Ehlinger could take the job from Buechele, but Buechele’s experience should give him the edge. With Tom Herman’s offensive style, this side of the ball should improve based on his presence alone.

Herman was left a full cupboard by Strong, and I often said I thought Charlie Strong could win 10 games in 2017. Herman has the talent to help the Longhorns make that jump.

Remember, this is a list of teams who can make a big leap in wins. The Cyclones only won 3 games last year, but there is probably no 3-win team in America that feels as good about its program as Iowa State. The three-headed monster on offense returns with quarterback Jacob Park, running backs David Montgomery and Mike Warren, and wide receiver Allen Lazard, making the Cyclones another one of the Big 12 teams that can see real improvement.

The concerns for Iowa State are likely to be on defense, where depth and top-end talent were an issue last season. The good news is the Cyclones welcome in two Top 100 JUCO prospects in Ray Lima and Matt Leo. Lima is the seventh-best JUCO defensive tackle, while Leo is a 6’7”, 265-pound defensive end. Iowa State allowed 5.2 rushing yards per attempt, which was third-worst in the Big 12.

Also, Iowa State’s secondary was solid last season, ranking 3rd in the Big 12 in passing yards allowed per game. I expect that to be a strength again behind second-team All-Big 12 safety Kamari Cotton-Moya and Brian Peavy.

Overall, if Iowa State can make the jump to bowl eligibility, that would be enormous in Matt Campbell’s second season in Ames.

Remember, this list is about which teams can make a jump…! Kansas won 1 conference game last year and 2 games overall. Is 3 or 4 wins a big jump? As a percentage it is! So yes, the Jayhawks are one of those Big 12 teams that can make the leap in 2017, by their own standards.

The Jayhawks made a huge splash on the coaching from by hiring offensive coordinator Doug Meacham away from TCU. So, Kansas now has its air raid OC to run an offense that junior-college transfer Peyton Bender is expected to lead. Bender was a top-25 QB coming out of high school and spent time in Mike Leach’s offense at Washington State, so the playbook should be familiar to the new quarterback. Most of the offensive line returns and outside targets coming back include quality players like LaQuivionte Gonzales and Steven Sims.

Defensively, Dorance Armstrong and Daniel Wise anchor the line. They’re both budding stars who should get more notoriety as Kansas continues to slowly improve. Fish Smithson has graduated so Mike Lee becomes the best player in the secondary. Lee shocked many in the program by how rapidly he improved as a true freshman in 2016. The first-year safety started the final eight games. His season highlight was also the season highlight for KU, with his overtime interception versus Texas. Lee finished second on the team in total tackles.

With the Big 12 having quality in the conference top to bottom, Kansas’ ascension may take more time than most, but David Beaty absolutely has this program on the right track.