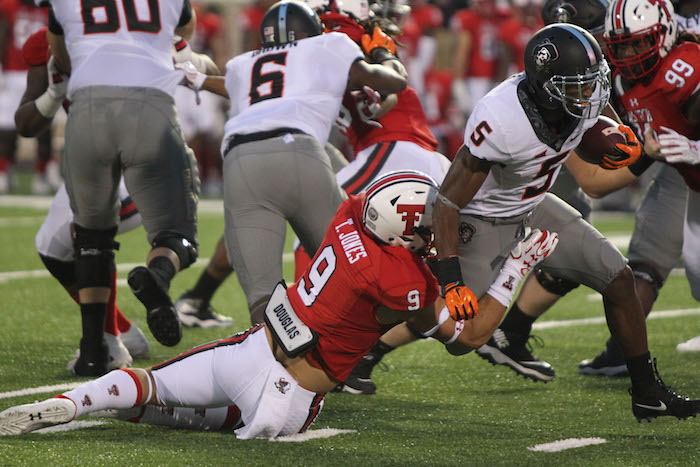 The Sooners did not play in Week 5 and are well rested as they welcome in the Iowa State Cyclones on Saturday. We are well past the 700-day mark since the Sooners last lost a Big 12 conference game. Add that to their win over Ohio State and having the Sooners at the top spot makes the most sense.

TCU also was off last weekend. But they capped off a fantastic month of September at 4-0, highlighted by a win in Stillwater over Oklahoma State. Now the Horned Frogs get College GameDay coming to town ahead of their Saturday afternoon game against the West Virginia Mountaineers. It’s going to be a great scene in Fort Worth.

It’s not clear what exactly is going on with the Cowboys, but it isn’t all clicking like it should be. The Pokes had to get out of Lubbock with their 41-34 win over the Red Raiders. The Cowboys had missed field goals, threw a pick six, and squandered away other opportunities. The bye week is coming at a perfect time for Mike Gundy to figure out how to get this team back to College Football Playoff contention. If they keep playing like they did in Lubbock, a Big 12 title will be a distant memory by the end of October.

The Mountaineers were off last weekend and now gear up for a road trip to TCU. West Virginia has its issues on defense, including allowing Kansas running back Khalil Herbert to pile up nearly 300 rushing yards two weeks ago. This should have been a point of emphasis for Dana Holgorsen and Tony Gibson. Kyle Hicks and Darius Anderson can’t wait to get ahold of this WVU run defense.

The Red Raiders played an admirable game against the Oklahoma State Cowboys on Saturday night. Kliff Kingsbury continues to solidify his job status for 2018 and beyond. Tech does need to win 3-5 Big 12 games, but if you add in competitive games against teams at the top of the Big 12 conference, that will be a positive for him as well. Tech’s offense hasn’t dropped off too much since Patrick Mahomes left the program, but it’s the defense that is creating turnovers and finally, finally doing its part to help out. In 10 trips to the Texas Tech red zone, the Red Raiders only allowed Oklahoma State to score five touchdowns. That’s a great ratio.

The Longhorns went on the road and picked up an impressive win in Ames in which the defense led the way. Texas held Jacob Park, David Montgomery and the Cyclones offense to a meager seven points. UT’s defense has only allowed 34 points since giving up 51 to Maryland in Week 1. The offense remains a work in progress, but if the defense keeps playing like it has, then this team will be in most of the games it plays the rest of the season.

The Wildcats continue to struggle in some areas. It just doesn’t look like a Big 12 contender as they’ve had special teams miscues, dropped passes, and more as they try to right this ship. The biggest concern is that Kansas State was coming off a bye week and did not look much better than they did before the off week. Now the Wildcats have a very tough three-game stretch at Texas on Saturday, followed by home games against TCU and Oklahoma.

The Cyclones did not look all that good against Texas. Jacob Park couldn’t throw the ball in the ocean and David Montgomery was kept in check. I had higher expectations for Iowa State heading into that game. Had you told me that the Cyclones would hold Texas to 17 points, I would’ve guessed a double-digit win for Iowa State. The defense had its moments, but Matt Campbell needs to get his offense back on track this week to have any chance against Oklahoma.

One week after playing their best game of the season against Oklahoma, the Bears put together a solid performance against Kansas State. For a group of young and inexperienced players to go into Manhattan against a Bill Snyder coached team and compete is impressive. It’s all about baby steps for Matt Rhule’s squad, but Baylor fans have seen some serious growth from Week 1 to Week 5.

Kansas didn’t play this past weekend. The good news is that they didn’t lose a game. The bad news is this defense, which has been awful, welcomes in a high-flying Texas Tech offense this weekend. Godspeed, boys.