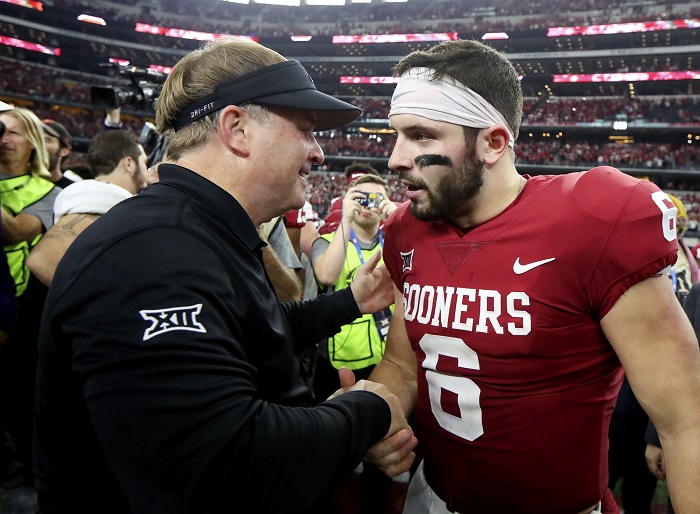 The two have had a tumultuous relationship that dates back to when Mayfield was under-recruited coming out of high school at Lake Travis High School outside of Austin, Texas.

First was in 2014, when Mayfield was sitting out for Oklahoma due to transfer rules from Texas Tech. Patterson accused Mayfield of stealing TCU’s signals, as Mayfield played under TCU offensive coordinator Sonny Cumbie at Texas Tech.

Then, prior to their College Football Playoff appearance in 2015, Mayfield said that TCU was the school that disappointed him the most during his recruitment, because the quarterback claimed TCU told him they’d offer him a scholarship, but never did.

Patterson shot back shortly, saying, “I like Baker Mayfield. I think he’s a good kid and that’s what disappoints me. If Baker Mayfield wants to blame TCU for 128 BCS schools not offering him a scholarship, that’s fine. But ask Kliff Kingsbury why he didn’t offer him a scholarship at Texas Tech. Ask about Baker’s dad [James]. He’s an arrogant guy who thinks he knows everything. If people knew the whole story, they might not have a great opinion of Baker or his father.”

Clearly, there was no love lost between Patterson and the Mayfield family. But the feud between the two was far from over. In fact, it was just getting started.

Last month, Mayfield was seen hitting a TCU player in the head during warm ups prior to their meeting in Norman. Lincoln Riley blamed it on TCU running through the OU warm ups as they came onto the field before kick off. But Patterson said earlier this week, “The bottom line is, they had a great recruiting weekend that week we had them, and we couldn’t get on the field, either side. We asked the guy that was in charge and he said, I don’t know which way to send you… I don’t really appreciate them trying to say that we were in the wrong, because that was okay to let a quarterback throw a ball and hit a guy in the head that hasn’t played for two weeks. Now I’m not saying that was the reason, but I’m just gonna give you a little history.”

But after Saturday’s Big 12 championship game, there was the hug, quick chat, and then lots of kind words from Patterson, who opened his press conference saying, “I have a lot of respect for the University of Oklahoma and their football team and for Baker Mayfield, great player.”

Come again? That raised my eyebrows, but apparently I wasn’t the only one. The first question to Patterson in the postgame press conference was about Mayfield’s career and how challenging it’s been for Patterson, who responded, “Well, yeah, Baker and I are very much alike, he could probably be a linebacker because he plays quarterback like a defensive guy. He’s going to challenge you and do the things he needs to do. Kenny plays quarterback like a defensive guy. We all grow up. We all go through it. I have been here a long time.”

It’s not clear what exactly Patterson’s point was, but my interpretation: let bygones be bygones. Baker Mayfield owned TCU over his tenure in Norman, but he owned the entire Big 12 over the past three seasons.

Patterson added he is now cheering for the Sooners as they represent the Big 12 in the College Football Playoff, adding, “I’m proud of them being our conference champion.”

Just two hard-headed guys realizing they’re more alike than they ever realized or just wanted to admit. That’s usually how it works anyway.