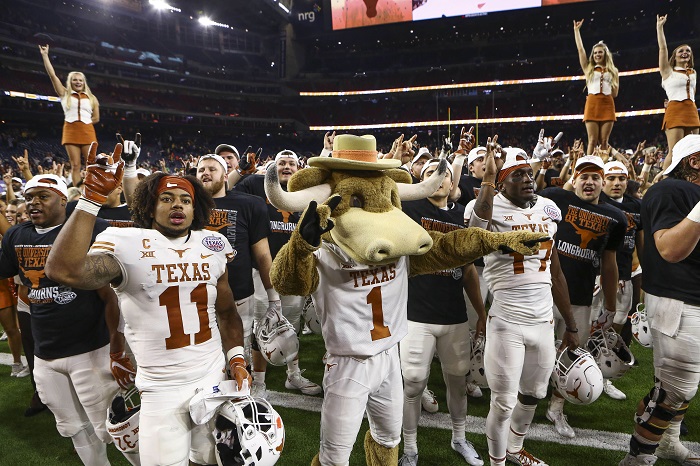 I hear it all the time, “Who has the best conference in college football?” SEC? Big 10? ACC? What about the Pac-12? Very rarely are you going to hear the words “Big 12” coming out of someone’s mouth in that conversation. Whether you do it or not, there are plenty of folks out there who love to bash the Big 12 conference (cough, Paul Finebaum, cough). Congratulations Texas, you beat Missouri 33-16, and gave the Big 12 its second win of the bowl season (evening the record at 2-2), and getting that win over an SEC, and former Big 12 foe, always worth a few extra brownie points. Texas wraps up a 7-6 season, its best since going 8-5 under Mack Brown’s final season of 2013. Add this win to Tom Herman’s awesome recruiting class and its starting to feel like the tide just might be turning in Austin. Now whether you like it or not (If you don’t like it, have a few alcoholic beverages and try reading it again), here is the good, the bad and the ugly from the Texas Longhorns’ victory in the Texas Bowl.

Malik Jefferson was out with an injury. Deshon Elliott and Holton Hill skipped the bowl game and declared early for the NFL Draft. Despite looking somewhat like the Washington Sentinels, the Longhorn defense stepped up in a big way. Two fumble recoveries during the second quarter helped stagnate a Missouri offense that was gaining momentum. One of those two fumble recoveries was returned for a touchdown by Anthony Wheeler. In the second half, Texas swarmed around Drew Lock after a botched snap, forcing him to push it out of the back of the end zone for a safety. Without that, Texas likely scores a second defensive touchdown. Additionally, they forced six 3-and-outs. The defense is the reason Texas won this game.

The Tigers started inside their own 16-yard line six times. Half of those came inside their own 10-yard line. It did not matter where Dickson punted from. He can hit the coffin corner, and it paid off dividends for the Texas defense. Missouri did not cross the 50-yard line until their sixth drive, which came in the second quarter. The Tigers went 3-and-out six times during the night. Dickson was a huge part of this team’s success on Wednesday night and was named the Texas Bowl MVP. Well deserved.

Texas started a drive at the Missouri 28-yard line with 3:14 remaining in the first half and a 21-7 lead. Freshman running back Daniel Young gains eight yards before being forced out of bounds. Senior defensive end Marcell Frazier jumps on the back of Young, places his forearms around the neck. It looked like Young was forced into giving Frazier a piggy-back ride. In self-defense, Young pulled off Brock Lesnar’s F-5 and dropped Frazier to the ground. The officials flagged Young, and the drive stalled. Texas ended up punting despite the amazing field position. It was a bush league move by Frazier, a terrible call by the officiating crew, and a drive-killer for Texas. It ended up being Missouri’s best defensive play of the night.

Back in the 1920s, a man named W. Edwards Deming said 94 percent of mistakes are caused by management. Tim Beck is the epitome of that statement. The offense got off to a hot start with a 75-yard drive in 1:28. After Texas punted on drive No. 2, he pulled Shane Buechele for Sam Ehlinger. The freshman led a 3-and-out on his first possession, so it looked like a bad mistake. On Ehlinger’s second drive, the first play was a 42-yard pass. Two plays later, Ehlinger found John Burt for a 7-yard touchdown to place Texas up 14-0 in the first quarter. Buechele came out for the next possession and the rest of the half. Despite starting one of their drives from the Missouri 28-yard line, the Texas offense never made it back into the red zone during the first half.