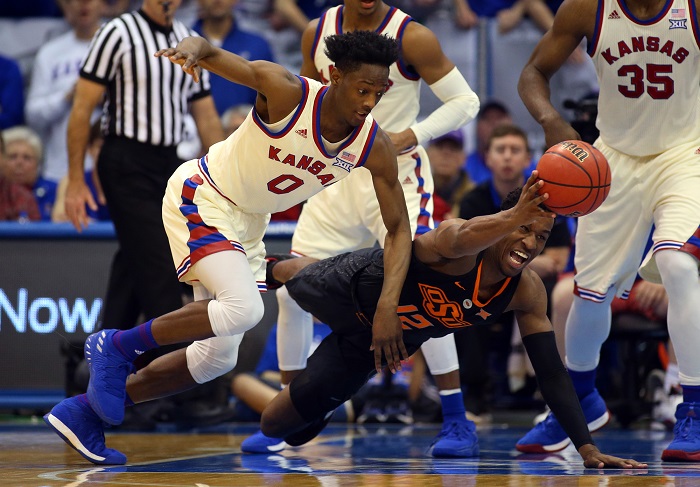 As the calendar flips to February and the Super Bowl comes and goes, the casual sports fan finally turns his or her attention to college hoops. The diehard college basketball fan, or the folks involved with the NCAA, may not want to hear it, but the reality is that in many cases college hoops has become an eight-week sport. The non-conference is taking place in the midst of college football and the NFL seasons, while the month of January is dominated by the College Football Playoff and the NFL Playoffs.

Finally, come early February, it’s college basketball time. And for those who haven’t been paying close attention, if you want exciting games with plenty on the line night in, night out, the Big 12 conference is where you will find it.

Now is the Big 12 the best conference in college hoops? That’s up for debate. You could certainly argue it, but considering the Big 12 just went 4-6 in the Big 12/SEC Challenge, there’s sure a debate on the other end as well.

But with six of the ten teams in the Top 50 in RPI and still practically every team in the conference a good two-week stretch away from an NCAA Tournament berth, you won’t find a more compelling basketball conference to watch over the next month.

On top of that, with Oklahoma State stunning Kansas, combined with Texas Tech’s smack down of TCU, the Big 12 is up for grabs. That’s something we haven’t heard over the past decade, as Kansas has won 12-straight Big 12 titles.

At the top of the Big 12 are Texas Tech and Kansas at 7-3 in conference play, while West Virginia and Oklahoma are one game behind at 6-4, with Kansas State and Texas both 5-5. 60% of the conference is within two games of first place. Also note: it’s technically the Red Raiders in first place, as they beat the Jayhawks in Lawrence back in early January. The two meet again on the final Saturday of the regular season in Lubbock, February 24th.

As we look around the country, the ACC is Virginia and everybody else. The Cavaliers now have a three-game lead in the conference standings (11-0) over Clemson (8-3). The Big Ten has been dominated by Purdue (12-0), but the Boilermakers do enter a tough stretch with the two teams chasing them, Ohio State and Michigan State, on the schedule this week. In the SEC, Auburn is 9-1 in conference play and two games ahead of Tennessee, who the Tigers have already beaten this season, and who they will not have to play again. And in the Pac-12, things got a bit tighter with Washington’s buzzer-beating upset over Arizona on Saturday night, but at best it’s at three-team race (Arizona, USC, Washington). Then, there’s the Big East, which is Villanova and… maybe Xavier (one game back)? But the Wildcats already beat Musketeers by 24 points earlier this season. The two meet again in two weeks.

What gives the Big 12 even more juice than the rest of the country is that it has a double round robin, meaning many of the teams at the top still have to play each other again over the next few weeks. This week alone we have West Virginia vs. Oklahoma, TCU at Kansas, K-State at Texas, and K-State vs. Texas Tech. Next week include a pair of top 15 match ups with Texas Tech hosting Oklahoma and West Virginia going to Kansas.

That’s not the case across the rest of the Power 5 conferences. Just like in football, the Big 12 has quality and depth over quantity. I firmly believe that staying at ten teams will only continue to benefit the conference, as people realize their true round robin in football and double round robin in basketball is incredibly difficult, and warrants more respect than it has previously received.

So as the month of February moves along and casual sports fans are looking for sports entertainment, look no further than the Heartland, where the most exciting finish in college basketball is coming your way.

Chris Beard quickly proving to be perfect hire for Texas Tech basketball
The Wrap Up: Big 12 basketball Game 10 recap and analysis
To Top