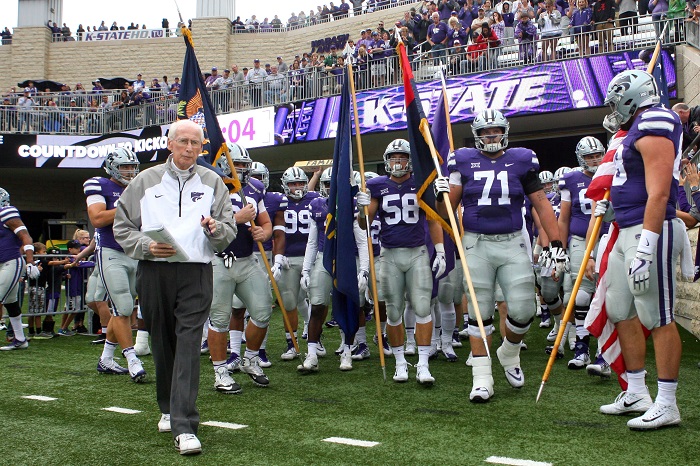 The Kansas State Wildcats held their spring game on Saturday at Bill Snyder Family Stadium. It was a beautiful afternoon: 45 degrees and rain. That didn’t stop lots of diehards from showing up, tailgating and getting a glimpse of what’s to come in the 2018  season. Here are a few takeaways and thoughts on the afternoon.

Wow, Bill Snyder and Andre Coleman will have a tough decision to make. Alex Delton and Skylar Thompson both looked improved and like legitimate Big 12 quarterbacks. Delton’s release was quick and his accuracy, especially considering the conditions, were impressive. Last season, Delton completed 57.6% of his passes, and if he gets the starting job, that should jump by an easy five percentage points, at least. He appeared comfortable in the pocket and one pass on an out route down the sideline to Chabastin Taylor (more on him later) will stick out in my mind for the rest of the spring and into the summer. Thompson had his moments as well, including a 41-yard hook up with Taylor. He also flashed solid speed and a good handling of the RPOs that are a staple of the K-State offense, but it was Delton who was better throwing the ball. He finished 21/28 for 201 yards and three touchdowns. Meantime, Thompson was 15 of 22 for 204 yards and two TDs. On the ground, Delton had 34 rushing yards to Thompson’s 33.

Sure, I haven’t seen all of spring ball, but for my money it’s Delton with a slight edge as we head into the summer.

Wow. And yes, who? Taylor was the #339 WR in the Class of 2017 out of Giddings, TX. He redshirted last year. He made a handful of fantastic catches in the first half. There was a 47-yard grab from Skylar Thompson. Later in the half, a ball underthrown from Hunter Hall was tipped around near the goal line before Taylor was able to haul it in for a touchdown. He finished the first half with five catches for 118 yards with two touchdowns.

Another wide receiver on the roster who is a redshirt freshman and had himself a solid afternoon. Of course, he’s another under recruited guy on the roster. Weber had nine catches on the day and at 5’10’’, 175, has interesting potential in the slot. Add him to a long list of wide receivers in Isaiah Zuber, Dalton Schoen, Zach Reuter and others, and it’s a very complete unit.

In the first drive of the second half for the Purple Team, Harter had three catches and one run, including a 10-yard touchdown catch. He’s listed as a fullback and his ability to catch the ball and run the ball is pretty unique given his size of 6’2’’, 248. Harter is from Olathe, KS and spent the first half of his career at Butler C.C. He adds another element to this offense that should be interesting and have lots of weapons this fall. He finished his day with seven catches.

I like the duo of Elijah Sullivan and Da’Quan Patton. In an era when it seems like every Big 12 team is down to two linebackers, this is a very solid duo. Patton redshirted last season after spending time at Trinity Valley C.C., but appears ready to not just become a leader for the Wildcats, but possibly one of the best at his position in the Big 12 conference. Meantime, Sullivan played in 24 games his first two seasons in Manhattan, and now it looks like it’s his time to shine as a starter alongside Patton. This will be a fun tandem to watch this fall.

Also note, let’s not forget Daniel Green, who is finally academically eligible after being one of the program’s top recruits from the Class of 2017. Snyder typically likes working guys into the program slowly and not throwing freshman into the mix right away, but that could be different for Green, who has enormous potential and upside.

As noted above, Adam Harter is going to be a fun option at this position since he is built like a tight end and has tight end hands as well. But let’s not forget about Luke Sowa. Another Butler C.C. transfer who ripped off a 39-yard run for a touchdown in the third quarter. Ever since Winston Dimel left the program, we’ve had our eye on Sowa this entire offseason and it looks like he’ll be put to use this fall in a rotating backfield.

Speaking of this position, Alex Barnes is clearly the No. 1 option. No shocker there. But who’s next? Mike McCoy is a name that has gotten lots of hype, but he didn’t earn a single carry on Saturday. According to Kellis Robinett, Bill Snyder has claimed McCoy lacks discipline. Well, Cornelius Ruff looks ready to step up if his name is called this fall. He’s a hard runner and likes contact. He received plenty of action on Saturday, racking up 30 yards on six carries. The redshirt freshman is getting his chance to shine after an outstanding career as a first team all-state player at Schlagle.

This was a surprising area of concern for the Wildcats last season, as they finished last in the Big 12 in allowing 309 passing yards per game. I sure hope that Kansas State’s offensive weapons didn’t look overly polished because of the unit they were going up against. Some key pieces were missing Saturday due to injuries (Kendall Adams), but there is reason to believe the secondary will improve. Brock Monty is a sophomore DB who had himself a solid afternoon, while Colby Moore, who spent most of his career on special teams, looks poised to step up for this unit. Kevion McGee was challenged often in the secondary and had more good moments than bad. A.J. Parker, E.J. Thomas, Walter Neil Jr., and Ross Elder are others who will be asked to get this unit back on track.

It’s every fans worst nightmare. You don’t think about this group until they screw up. That’s the reality of the business. The first drive ended with a 39-yard missed field goal by Nick McLellan that hit the left upright. Two drives later, Jake Roarke badly missed a 48-yard attempt. Once again, it was 45 degrees and raining, and it was the spring game, but let’s not forget these guys! They’re as important as any on a team. The only made field goal was a 44-yarder from Andrew Hicks in the 4th quarter.