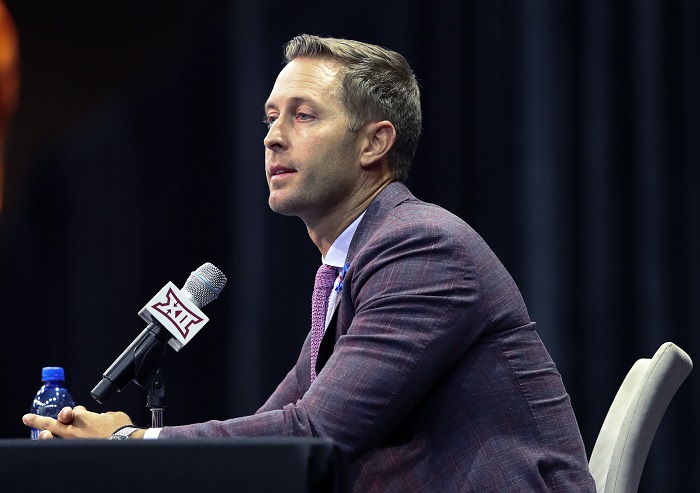 It’s no secret that Texas Tech head coach Kliff Kingsbury is on the hot seat. Last year Tech finished 6-6 after winning their last game of the 2017 regular season against Texas to become bowl eligible. Many would argue that if the Red Raiders would have lost that game that there may have been a coaching change but let’s not play the game of if and just look at the cold hard facts. Entering his sixth year as the man in charge, Kliff has an overall record of 30-33 and a Big 12 record of 16-29. Texas Tech was picked to finish eighth in the preseason media poll but take that as you want because we in the media are no where near perfect picking teams. With that being said, can Kliff Kingsbury afford to just get to a bowl game to save his job? While we may not know that answer quite yet, here is the best from Kliff Kingsbury throughout day one of Big 12 Media Days.

For the second straight year, Kliff decided not to make an opening statement and just get right into the questions. Man, I wish he would have made an opening statement because the questions he got were about as bland as my mother’s cooking skills. Seriously, I thought out of every single coach in day one of Media Days, Kliff got the worst set of questions. The only interesting thing he mentioned was about the quarterback race saying “We would like it to be one guy. That’s how I have done it, but whatever is best for the offense we’ll do. I would like to push the reps and focus to one guy and develop him to the highest extent, but we’ve had success in our program of really pushing it to one guy and making him the focus.” So, between Jett Duffey, McLane Carter and Alan Bowman, the quarterback race is still wide open in Lubbock.

To my surprise, there was no one around Kliff later in the day and I got a chance to speak with him one on one. So here is my interview with the head coach.

HCS: Even though you guys didn’t win the bowl game last year, how important was it to make it to a bowl?

KK: “The practices are huge. We had some young quarterbacks that needed to be developed and get those reps and some young defensive players that we red-shirted that we expect to contribute this year. The practices were huge. That work and the experience of getting to a bowl game is huge and you can’t really quantify how important that is.”

HCS: Do you ever feel any outside pressure, or do you go off the expectations you set yourself for your football team?

KK: “If you let any of the other stuff get to you than you’re not going to be as good as your job or focused as you should be. Since I have been in coaching its all about our program and how can we make it better and how can we do right by our players and focus on what we can control.”

HCS: You return all five starters on the offensive line. How big is that for you offensively even though your quarterback position isn’t settled yet?

KK: “That’s huge. It’s hopefully a group we can lean on in the run game and when we need to throw it we can protect at a high level which will make those guys comfortable back there. So that’s a really good starting point to have when you have a young inexperienced guy at quarterback.”

HCS: What was the biggest factor that turned the defense around last season?

KK: “I think continuity more than anything. We had such a revolving door at yhe defensive coordinator position for so many years that it was impossible to develop a culture and identity on that side of the ball and a sense of pride. Having coach Gibbs going into his fourth year, now he has recruited for his scheme and all his guys are juniors and seniors. There’s an expectation that we aren’t going to take a backseat to anybody and we are going to play at a high level. The only way you get there is with continuity and having a guy who plays multiple years.”

HCS: Heading into the season do you have a certain bar you set? A bowl game? 8 wins? 9 wins or whatever it may be?

KK: “We try not to set a bar. It’s more just about major improvement across the board. We knew last year we were competitive but didn’t finish the games like we needed to. This year we got to find a way to finish those games at the end.”

HCS: I must ask about the purple suit, what was the thought process for the suit game?

KK: “I have a guy and just say “Hey give me a cool suit.” That’s the thought process. This is more of a summer color and that’s pretty much it.”