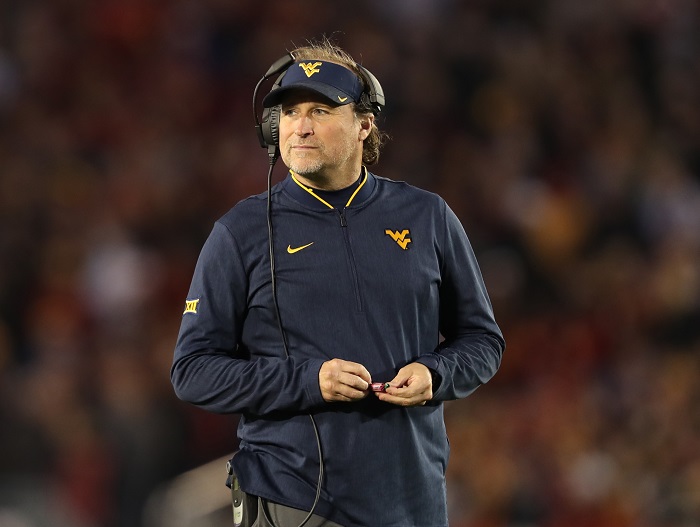 Is the Jake Spavital experiment working in Morgantown? It seems to be on thin ice, to say the least.

After Saturday’s 30-14 loss to Iowa State in Ames, which ended West Virginia’s undefeated season, and likely dropped them well outside the Top 10 in this week’s rankings, head coach Dana Holgorsen said, “It’s the worst offensive performance I’ve seen in my 30 years of coaching. Are they that good on defense? I don’t know. Oklahoma State scored 42, we scored seven… I didn’t reach our offense, I didn’t get ’em ready to play. It’s on me, I’ve got to do a better job.”

That may be true, and it’s the professional move and the right move for Holgorsen to take responsibility as the head coach, rather than deflect it to his staff or the players. But even he knows, the inconsistency from this unit has been beyond frustrating for a team that has (or had) a Heisman contender at quarterback and maybe the best group of wide receivers in the country.

Remember, it was prior to the 2017 season that Dana Holgorsen decided he would stop calling the plays as a head coach. At the time, he said it was important for him to assume more of a CEO-type role, and allow Jake Spavital to run the offense, saying in February of 2017, “He has proven that he can be a coordinator. It’s his room, and he will call the plays and will do a great job of that. Now, you know where I’m going to be. I am going to be lurking, but I am not going to be questioning.”

Well, in many ways that feels like a lifetime ago, but for the first time, Holgorsen was clearly questioning it all, and rightfully so. The offense has lacked consistency the entire season and while I don’t pretend to be someone who can step in and run a college offense tomorrow, the play calling remains suspect at times. A key 3rd and 1 in the second half on Saturday night resulted in an unoriginal run between the tackles that failed, despite the fact that the Iowa State defensive line was having it’s way against the West Virginia offensive line all night long. Most importantly, Holgorsen agrees, saying after the loss on Saturday night, “We didn’t make good decisions, we didn’t call good plays, we didn’t play with effort, we didn’t block, we didn’t do everything.”

The kicker though, was the line that came next. “I’ve coached offense for 30 years and I’ve got to a better job of coaching offense.”

Is that a sign of changes coming to the offense? Does it mean we should expect Holgorsen to take a larger role in potential offense game planning and possibly even assisting in some in-game play calling?

If so, WVU fans should rejoice. Spavital had no answers on Saturday night. He was unable to adjust. The WVU defense gave the offense the ball six times within one score and did nothing with it. And while Iowa State has a good defense, they never really mixed it up. Sure, Jon Heacock had a great game plan, but he didn’t have to change much, because the Mountaineers were unable to get anything going.

Without knowing what’s going on in the locker room, if Dana Holgorsen thinks he needs to get back to calling plays for this team to reach its potential, so be it. The Mountaineers have the best quarterback they’ve had since the Geno Smith era, and to have Will Grier for two seasons, and not have this team reach a Big 12 Championship Game, would be incredibly disappointing and a let down. It would mean the program would not be able to capitalize off the momentum, recruiting windfall, extra attention, free publicity, and much more that comes with that kind of success.

The goals set before the season can certainly still be reached in Morgantown, although the margin for error is now slim to none.

So is now the time for Holgorsen to make a drastic move on offense? Or at least have a heavier influence? If so, it’s unlikely you’ll hear much complaining from the Mountaineer Faithful.

We’ve all heard how exercising is an essential tool in combatting issues such as depression and anxiety and can have astonishing effects...

The Oklahoma Sooners always have one of the top wide receivers in the country and 2021 is no different. Marvin Mims is...

The Kansas Jayhawks are losing one of their young bright players. On Wednesday, defensive stalwart Marcus Harris’ name was in the transfer...

Well folks, Pro Football Focus strikes again! I have said many times here that I have a love/hate relationship with PFF. Sometimes...

Vegas wasn’t built on being on the losing side of bets, so when you see odds like the ones below to win...

Iowa State Officially a Force to be Reckon With in Big 12
Big 12 Week 7: The Good, the Bad and the Ugly
To Top