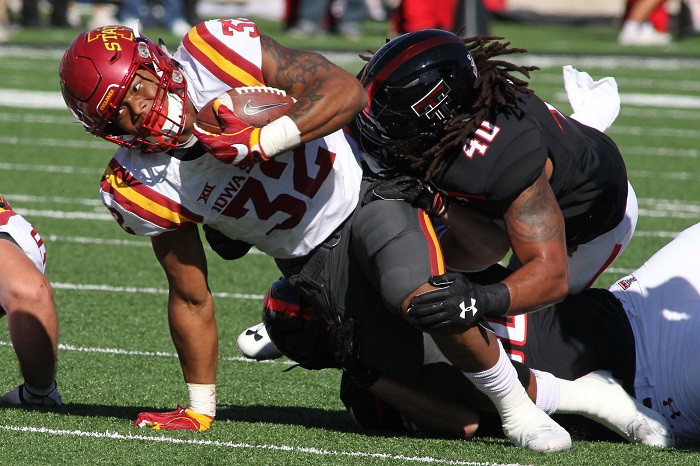 Here is everything you need to know about the upcoming conference matchup in our Iowa State vs. Texas Tech Preview.

Fun Fact:Texas Tech leads the all-time series vs. Iowa State at 11-5 and has a 4-3 advantage in games played in Ames.

This might be Bowman’s toughest test to date as the true freshman goes into a difficult road environment against the top defense in the Big 12 Conference. Bowman returned from a collapsed lung last week against Kansas and finsihed 36 of 46 for 408 yards, with three touchdowns to one interception. For the season, Bowman is completing over 70% of his passes for more than 2,000 yards and 14 touchdowns to just four interceptions.

Allen ranks second among active Red Raiders with 241 career tackles, trailing only Jah’Shawn Johnson in the category. He has four interceptions, a forced fumble and two fumble re coveries during his two-plus seasons as well. He ranks in the Top 10 in the Big 12 with 7.4 tackles per game along with top 20 in the conference with 5.5 tackles for loss. He’s the leader of one of the top linebacker units in the Big 12 with Jordyn Brooks and Riko Jeffers.

I’m tossing the two true freshman quarterbacks into the spotlight here because they are both going up against a pair of the top defense in the Big 12. Iowa State’s offense has made a resurgence with the insertion of true freshman QB Brock Purdy in the last two games. With Purdy at the helm, ISU has two-straight wins over top-25 opponents, is averaging 39.0 points, 481 yards of offense and 7.1 yards per play.

Iowa State will need to give Bowman a hard time in the backfield and try to rattle the true freshman on the road early in the first quarter. That’s where Bailey steps in. He leads the team in TFL (9.5) and sacks (4.5), ranking 17th and 33rd nationally, respectively. Bailey is tied for fourth in career sacks at ISU with 15.0.

Tech has done a good job forcing turnovers, with 12 this season, which ranks 42nd nationally and second in the Big 12. But at times they haven’t done a good job protecting the ball. They are +1 in turnover margin, which ranks 3rd in the Big 12, but with 12 takeaways, that should be a higher number. But the Red Raiders need to get the ball out of Bowman’s hands quickly and try to find the seems in the Iowa State defense that West Virginia could not find a couple weeks ago. I think Kliff Kingsbury’s offense is actually bet set up to beat ISU’s defense than is Jake Spavital’s with Will Grier, who kept trying to find the deep ball to guys in double coverage. Also, the best case scenario for the Tech defense is to keep Iowa State out of the Red Zone, because they are perfect on the season at 16 for 16, which is obviously the best in the Big 12. Iowa State has also gotten its running game going, with over 380 rushing yards the past two games, despite still ranking last in the Big 12 in rushing yards per game. Tech’s run defense needs to focus on Montgomery and watch Purdy on the RPO. The Red Raiders rank second in the Big 12 in rushing defense.

The Cyclones’ offense has been a completely different animal behind the true freshman Purdy. But he hasn’t seen a defense like Texas Tech’s that appears to be getting stronger each week. Since halftime of the West Virginia game, Tech has allowed Big 12 teams to score 30 points in the past 10 quarters against WVU, TCU and Kansas. That’s impressive. Ideally, Iowa State gets its rushing game going early and then can take some shots to Hakeem Bailey, whose 20.0 ypc average leads the Big 12 and is 17th nationally. Defensively, take away the short passes from Bowman. Kingsbury will likely use this early to get his true freshman in a grove on the road. Make the Red Raiders run it or take deep shots downfield. The Red Raiders have great wide receivers like Antoine Wesley, but Iowa State should be able to trust its cornerbacks in this spot.

Prediction: Texas Tech 24, Iowa State 21. The Red Raiders have only allowed 89 points in Big 12 play, which is the best in the conference. Also, the Red Raiders have given up less than 20 points in back-to-back Big 12 games for the first time in five years. It’s a different Texas Tech team that has its mojo going in a way it hasn’t this late in the season in a long time. Plus, Texas Tech will be looking to extend its three-game Big 12 road winning streak that dates back to the 2017 regular-sea son finale against Texas. That streak, as it stands now, is the longest by the Red Raiders since defeating Kansas State, Texas A&M and No. 19 Kansas away from home in 2008. I like the Red Raiders to go on the road, give Purdy some trouble, and eek out a tough early road win. Also, Kingsbury loves early starts. Tech is 5-2 under Kingsbury in 11 a.m. road games.