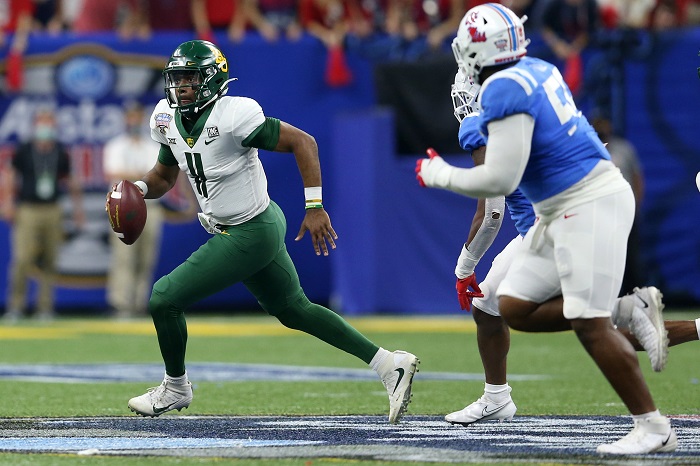 The Baylor Bears defeated the Ole Miss Rebels, 21-7, in the Sugar Bowl on New Year’s Day, giving the Bears a victory to end the 2021 season.

The win was a momentous one for the Bears. By finishing the season 12-2, the Bears concluded their first 12-win season. The Bears won their first New Year’s Six bowl game in the College Football Playoff/Bowl Championship Series era. It was also Baylor’s first Sugar Bowl win since 1957.

Under second-year head coach Dave Aranda, the Bears wrapped up a 10-win turnaround from his 2020 debut and won a Big 12 Championship. That 10-win turnaround is tied with Michigan for the best in college football history, per ESPN.

The game was not aesthetically pretty. Baylor ran the ball like a cudgel and quarterback Gerry Bohanon did not have an efficient passing game. Ole Miss (10-3) lost its starting quarterback, Matt Corral, in the first quarter due to a lower leg injury. The quarterback, who is headed for the NFL, could only watch on crutches as his backup, Luke Altmyer, tried to help the Rebels overcome the Bears. Baylor sacked Ole Miss quarterbacks an incredible 10 times in the game.

Baylor linebacker Terrel Bernard was the game’s most outstanding player after finishing with 17 tackles, two sacks and one pass breakup.

Here are our three takeaways from the game.

Baylor forced three total turnovers, but the Bears impacted the contest with two game-defining interceptions that led to 14 Baylor points.

The first came in the second quarter as Ole Miss was closing in on taking the lead in a scoreless game. With Ole Miss starter Matt Corral out of the game, his back-up, Like Altmyer, was guiding the Rebels down the field. He was set to throw nothing more than a quick pass to the outside. But Baylor linebacker Matt Jones picked up on that, leapt up and deflected the ball into the hands of cornerback Al Walcott. He then chugged 96 yards down the Baylor sideline for the longest pick-six in Sugar Bowl history, giving Baylor a 7-0 lead.

From there, the Baylor defense kept the Ole Miss offense at bay, at least until Altmyer threw a long touchdown pass to tie the game in the third quarter. Ole Miss was down, 14-7, early the fourth quarter and looking to answer after a Bears offensive touchdown. Altmyer threw over the middle of the field, but JT Woods — who had picked off a Corral pass in the first quarter — picked off Altmyer’s pass and gave the Bears great field position inside the Ole Miss 20. From there, Baylor quarterback Gerry Bohanon connected with wide receiver Tyquan Thornton on a short touchdown pass to give the Bears a 21-7 lead.

Baylor’s defense played well all night. But it was the turnovers they forced that proved to be game-changers.

It was a mixed bag to be sure. The Bears are a run-first team, and by that lens, the Bears did their job. Abram Smith rushed for 172 yards. Monara Baldwin rushed for 48 yards on one carry, but that one carry was his touchdown run that broke the 7-7 tie. The Bears rushed for 279 yards as a team. If you’ve watched Baylor at all this season, you know the Bears pride themselves on the run game.

The pass game was ugly. Quarterback Gerry Bohanon threw for just 40 yards. He threw for one touchdown and one interception. That heavily influenced the numbers for top receiver Tyquan Thornton. He caught just one pass. Of course, it ended up being a touchdown.

The Bears also has significant issues sustaining drives. By game’s end the Bears were nearly 50 percent on third down. But, for a while they were awful on that down. The Bears had fewer first down (12) than Ole Miss (20) and despite their productive run game possessed the ball (28:24) less than Ole Miss (31:36).

File this under ‘doing what you have to do to win the game.’ That’s what the Bears did offensively.

The first-quarter injury to Ole Miss quarterback Matt Corral changed the complexion of the game. Corral, one of the top passers in the country, was hurt in the first quarter after being sacked by Baylor. He returned to the playing field on crutches late in the second quarter. While his backup seemed to gain some confidence in the contest, there was no replacing a potential first-round pick on the fly.

His injury allowed Baylor to pin its ears back and go after his backup, Luke Altmyer, and more often than not, whether it was a sack, a pass rush or a pass break-up, the Bears’ defense influenced what he did.

At a larger level, it caused quite the conversation on social media about Corral’s decision to play even though he’s headed to the NFL early. Corral chose not to opt-out and play one last college game. He shouldn’t be criticized for that. He wanted to do it. You only get to play college football for so long. But, had Corral decided to opt-out, he shouldn’t have been criticized for that, either. Corral has a lot on the line professionally, and with coaches leaving schools for $10 million per year contracts and millions on the line for a potential first-round pick, the math is much different for playing in bowl games than it was 20 years ago.

Here’s hoping that Corral’s injury isn’t long-term. And here’s hoping that college football fans understand that one player’s decision to play, or not play, in a non-playoff bowl game isn’t a commentary on their lack of ‘love for the game.’ It’s not. It’s an acknowledgement of being educated about their future and what it holds after college, especially if they have clear NFL aspirations.